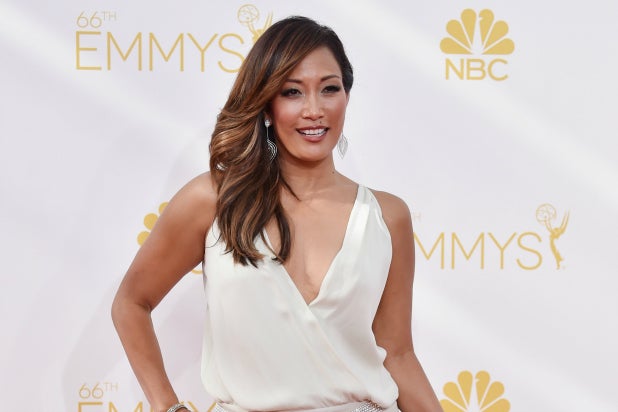 “Dancing With the Stars” judge Carrie Ann Inaba will replace Julie Chen Moonves as full-time co-host of CBS’ “The Talk,” TheWrap has learned. She is likely to take her seat at the table in January.

Chen left the daytime talk show on Sept. 18, announcing her departure at the end of the show in a pre-recorded message from the set of “Big Brother.” Inaba was a guest co-host on “The Talk” that day, and has appeared on the program multiple times since.

Until Chen announced she was leaving, she had not appeared on “The Talk” since her husband, Leslie Moonves, exited as chairman and CEO of CBS, two weeks prior, following sexual misconduct accusations made by a dozen women. An investigation into the culture at CBS that was sparked by the accusations made against Moonves is currently underway.

CBS declined to comment on Inaba’s addition to the daytime talker when reached by TheWrap.

“Right now, I need to spend more time at home with our husband and our young son, so I’ve decided to leave ‘The Talk,'” Chen told viewers when announcing her exit. “I want to thank everyone at the show for the wonderful years together I will always, always cherish the memories we shared. Most importantly, I want to thank you the viewers for allowing me into your home every day. It is a privilege I will forever be grateful for.”

Chen continued: “You ladies got this.” She seemingly endorsed Inaba as her full-time replacement, adding: “You’d look awful good sitting in that chair, my Asian sister.”

“For eight seasons, Julie Chen has co-hosted ‘The Talk’ with incredible energy, grace and professionalism,” said CBS in a statement, shortly after Chen announced she was leaving. “Her talents played a big role in our successful launch of CBS’ first network daytime talk show, and in the series growth into an Emmy Award-winning broadcast. All of us here have tremendous appreciation for the dedication and passion she brought to the show every day and for her generous role as an ambassador for CBS Daytime. We are grateful for her many other contributions, respect her decision and wish Julie all the best in everything she does.”

Chen said in a statement before her exit that she was “taking a few days off from ‘The Talk’ to be with my family” and would be “back soon.” But that didn’t stop her co-hosts from discussing the Moonves matter last week, with Sharon Osbourne saying, “Obviously, [Moonves] has a problem.”

Though Chen left “The Talk,” she is returning as host of CBS’ “Big Brother” franchise.

Back in July, after Ronan Farrow’s initial New Yorker story described the accusations against Moonves, Chen briefly discussed the news on “The Talk.”

“Some of you may be aware of what’s been going on in my life the past few days,” Chen said at the top of the July 30 episode. “I issued the one and only statement I will make on Twitter. I stand by that statement today, tomorrow, and forever.”