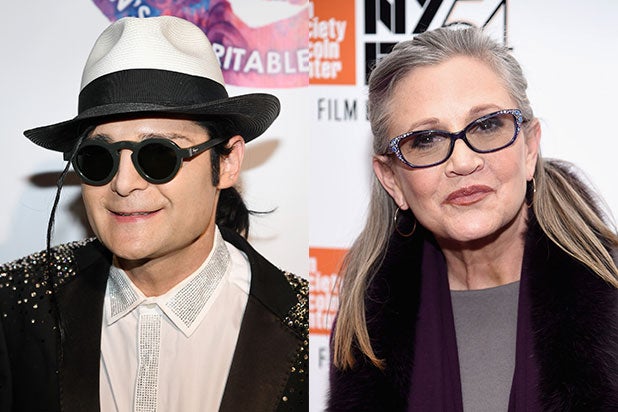 Carrie Fisher was honest about her addiction, and according to her “The ‘Burbs” co-star Corey Feldman, honest to others about their addiction, too.

The former child star told People that the late actress volunteered to help him get off drugs before he became addicted to heroin.

“I was not at the best point in my life and I was about to go off the deep end to the dark side right before I became a heroin addict, and she saw it coming,” Feldman said. “She saw the darkness that was growing in me, but I didn’t understand it at that point. I didn’t know what was coming.”

“Carrie looked into my eyes and saw the pain and recognized it,” Feldman added. “She said to me, ‘Honey, I got tot tell ya, this is your bail out. This is your chance to become clean and I can help you. Or you can be in denial and you’re going to go down this long, hard road.’ “

He continued, “At the time, I was like, ‘I have no idea what you’re talking about, but I really appreciate that you’re reaching out and you’re sweet, but I’m fine.’ And I believed I was fine. But she had some great psychic ability and she saw my future. She knew I was headed for danger.”

And Feldman admitted she was right — he became a heroin addict a year later.

“[Carrie] told me, ‘You may believe you’re fine, but you’re not. You are changing seats on the Titanic,’ ” he remembers. “Sure enough, a year later, I tried heroin for the first time and became an addict.”

Fisher died Tuesday at the age of 60, days after she suffered a heart attack on a flight from London to Los Angeles. Her family had kept fans up to date on her condition saying she was in stable condition, until family spokesman Simon Halls told media she had passed away.

One day after Fisher’s death, her mother, Debbie Reynolds, passed away at the age of 84 due to a possible stroke.

“We did have a nice back and forth friendship, but unfortunately we never reconnected in the past decade, which is sad,” Feldman recalled of Fisher. “I would have loved to have said goodbye. You just never know. It’s one of those things where we all really need to take notice and appreciate the people in our lives.”

And like many, Feldman only had good things to say about Fisher, who was known to many as Princess Leia in “Star Wars.”

“She was just very supportive and very positive and sweet. Every minute on the set with her was a pure joy, honestly,” he said. “We never had an argument; we never had an awkward moment.”