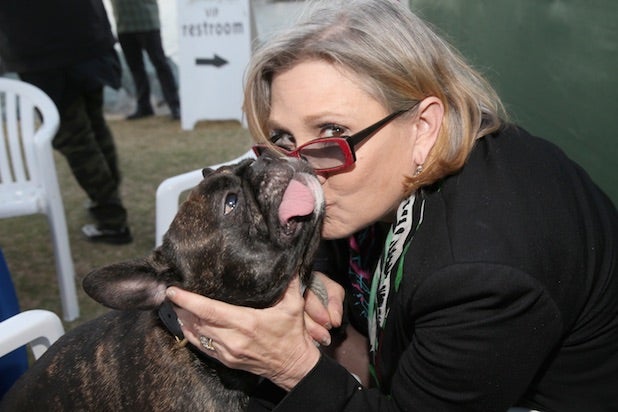 Carrie Fisher is gone, but not forgotten — especially by her beloved dog Gary.

Fisher’s longtime canine companion was taken to see a screening of “Star Wars: The Last Jedi” and recognized his late “mother” when he saw her on screen as General Leia Organa, according to a tweet from Veronica Miracle, an ABC reporter.

Yeah, go ahead and pretend that didn’t just shake you more than the first time you heard Darth Vader say, “No, I am your father.”

Gary previously posted a picture of him checking out a teaser for the film with the caption, “Just watched the new trailer of ‘The Last Jedi’ and my mom looks more beautiful than ever. #garymisseshismom#garyloveshismom #garyloveshisfans.”

If you’ve been following along with “The Last Jedi” news (or have already rushed out to see the latest chapter in the saga) you know that Gary is also in the movie. An alien creature inspired by Fisher’s dog appears in the film as a tribute to the late actress, who died on Dec. 27, 2016.

Watch a video of Gary at the screening below.

The late @carrieffisher's dog Gary just watched #TheLastJedi! He sat on Fisher's former assistant's lap during the film. She said his ears perked up every time she was on screen ❤️@starwars @ABC7 pic.twitter.com/2rCCGIi6Al