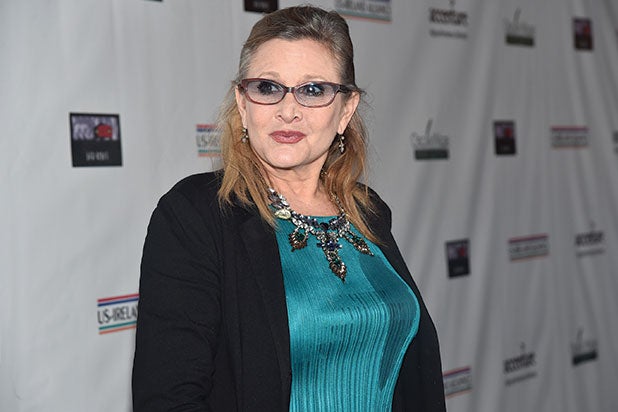 Carrie Fisher reportedly suffered a heart attack on a flight from London to Los Angeles on Friday.

According to TMZ, the “Star Wars” actress went into cardiac arrest about 15 minutes before the plane landed at LAX. An EMT who was seated in the rear of the plane then administered CPR. Paramedics rushed her to a nearby hospital upon arrival.

Two passengers who claim to have been seated in front of Fisher on the plane confirmed the report, with YouTube star and actress Anna Akana adding “she wasn’t breathing for 10 minutes or so.”

I'm in complete shock. @AnnaAkana and I sat in front of Carrie Fisher on our flight from London and she was just taken off the plane by EMTs

@RickMalambri @bradgage no 🙁 she wasn't breathing for 10 minutes or so. They were administering CPR up until we landed

Emergency officials told the Los Angeles Times that Fisher is in critical condition.

Los Angeles Fire Department spokesman Erik Scott told TheWrap that “at 12:11 p.m., the LAFD responded to LAX International Airport gate 74 for a patient on an inbound flight on cardiac arrest. Paramedics were standing by for the plane’s arrival and provided advanced life support and aggressively treated and transported patient to a nearby hospital.”

In a statement to TheWrap, United Airlines said, “Medical personnel met United flight 935 from London to Los Angeles upon arrival today after the crew reported that a passenger was unresponsive. Our thoughts are with our customer at this time and any requests for additional information should be directed to local authorities.”

Fisher is best known for her role as Princess Leia in the “Star Wars” films. She most recently reprised her role in last year’s “Star Wars: The Force Awakens.”

Reps for Fisher have not yet responded to TheWrap’s request for comment.