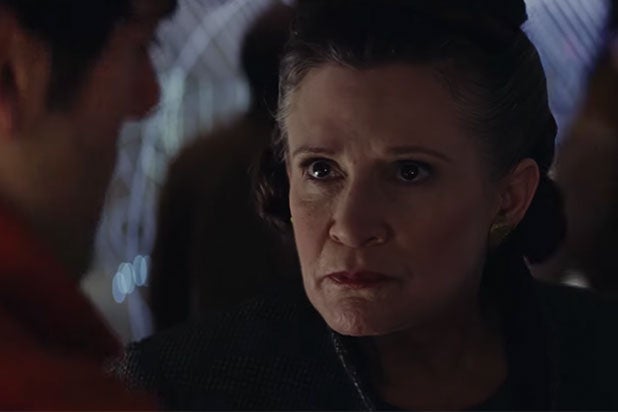 “We desperately loved Carrie Fisher,” said director J.J. Abrams. “Finding a truly satisfying conclusion to the Skywalker saga without her eluded us. We were never going to recast, or use a CG character. With the support and blessing from her daughter, Billie [Lourd], we have found a way to honor Carrie’s legacy and role as Leia in Episode IX by using unseen footage we shot together in ‘Episode VII.'”

In January 2017, Lucasfilm issued a statement concerning the future of Fisher’s General Leia Organa in upcoming “Star Wars” installments, saying no CGI would be involved. “We don’t normally respond to fan or press speculation, but there is a rumor circulating that we would like to address. We want to assure our fans that Lucasfilm has no plans to digitally recreate Carrie Fisher‘s performance as Princess or General Leia Organa,” said a statement on starwars.com.

In April 2017, Lucasfilm chief Kathleen Kennedy said that “Carrie will not be in nine” but that we would “see a lot of Carrie in eight.” Before then, Fisher’s brother Todd had told the New York Daily News that he and Lourd had given Disney permission to use footage of the actress for the ninth film. Fisher died on December 27, 2016 at the age of 60 after suffering a massive heart attack.

John Williams, who has scored every film in the franchise since 1977’s “A New Hope,” will return to compose music for “Episode IX.” It will be produced by Kathleen Kennedy, Abrams and Michelle Rejwan, and executive produced by Callum Greene and Jason McGatlin.