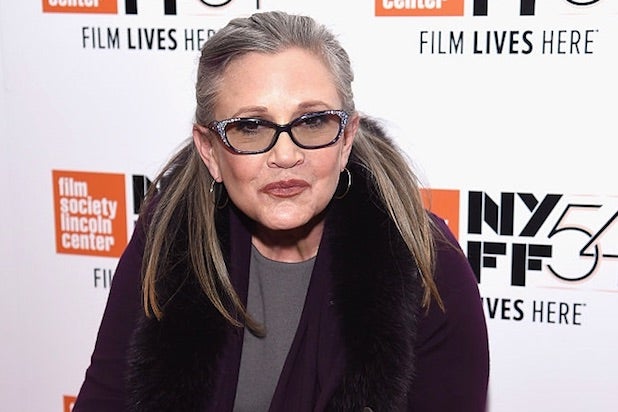 Carrie Fisher, who became a global icon as a teenager when she took on the role of Princess Leia in “Star Wars,” remains in a Los Angeles hospital in intensive care after suffering a heart attack on a flight from London to Los Angeles on Friday.

Since she was rushed from LAX to the UCLA Medical Center emergency room on Friday, messages of support poured out from the Hollywood community — as well as her “Star Wars” family — while her brother, Todd Fisher, has been issuing periodic updates to the press.

“I’m shocked and saddened to hear the news about my dear friend,” Ford said in the statement. “Our thoughts are with Carrie, her family and friends.”

Late Friday, Fisher’s brother Todd told CNN that her condition had not changed from earlier in the day, when she was moved from the emergency room to intensive care:

“Carrie Fisher is still in the ICU,” Todd Fisher said.

Before that, he told ET he was waiting patiently for an update on her condition.

“She is in the intensive care unit, she is being well looked after,” Todd says. “If everyone could just pray for her that would be good. The doctors are doing their thing and we don’t want to bug them. We are waiting by patiently.”

The Los Angeles Times obtained audio of the conversation between the pilot and air traffic controllers Friday afternoon:

“We have some passengers, nurses assisting the passenger,” the pilot said. “We have an unresponsive passenger. They’re working on her right now. We’re going to have them seated in about two minutes and we’re going to hopefully be on the deck in about five.”

According to YouTube star Anna Akana, a fellow passenger on her flight, Fisher fell unconscious and stopped breathing about 10 minutes before the plane landed and was medically evacuated.

Los Angeles Fire Department spokesman Erik Scott told TheWrap on Friday that “at 12:11 p.m., the LAFD responded to LAX International Airport gate 74 for a patient on an inbound flight on cardiac arrest. Paramedics were standing by for the plane’s arrival and provided advanced life support and aggressively treated and transported patient to a nearby hospital.”

Representatives for Fisher have not yet responded to TheWrap’s request for comment.