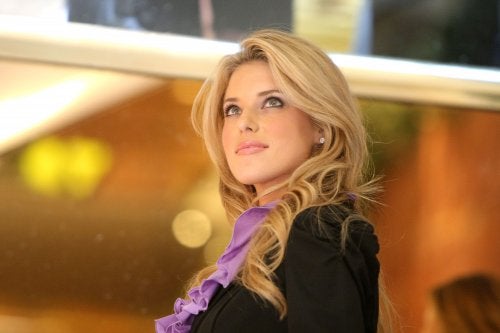 It’s been a week of wonders for Carrie Prejean, the former beauty queen who was stripped of her Miss California title last June over a contract dispute — and after semi-nude photos of her surfaced.

She began Monday as a potential ambassador for family values causes and possibly even for the Republican Party — and heads into the weekend dogged by an autoerotic sex video she once made for a boyfriend.

The boyfriend now states Prejean was 20 when she made it and not, as she claims, 17.

It’s hard to imagine that this implosion came about as part of a book tour. But the 22-year-old Prejean hit the talk shows this week to promote her memoir, “Still Standing: The Untold Story of My Fight Against Gossip, Hate, and Political Attacks.”

In this, she follows in the stiletto steps of her idol, Sarah Palin, whose own book, “Going Rogue,” debuts next week.

Prejean may be still standing, but she’s been wobbly at best during on-air appearances when questions about the video have come up.

On Wednesday night’s “Larry King Live,” Prejean abruptly removed her microphone and petulantly accused the old man in suspenders of asking “inappropriate” questions when he probed her reason for settling her lawsuit against Miss California officials. (It’s widely assumed that that reason was her “solo performance” video — which is in the hands of her opponents’ lawyers and could’ve surfaced as evidence in a trial.)

Yesterday TMZ reported that the unidentified ex-boyfriend, who’d originally pimped the video to the gossip site, accused Prejean of lying when she told her talk-show interrogators that she’d been a starry-eyed teenager when she made the tape.

Perhaps worse, the man told TMZ’s Harvey Levin that she had sent not one, but 15-20 explicit tapes of herself and had asked him to lie and say she was 17 when she made the videos.

As fascinating as any train wreck is, there’s a deeply sad undertone to Prejean’s story.

The “boyfriend,” it turns out, was someone she had met on the Internet and had known personally only during his four-day visit to San Diego. It was after he flew back home that she allegedly began bombarding him with X-rated videos that she took and sent from her cell phone.

“That’s what she’s all about — reaction and attention,” the man told Levin. “She wanted to hear all about how great she looks.”

The inescapable conclusion is that Prejean feels she can only party down with out of town strangers, or that her self-image is so low she doesn’t believe she can attract male friends through normal professional or social contacts.

This lack of self-esteem, coupled with a feverish, “To Die For” obsession for fame, has led her to a humiliating dead end.

Thursday in Washington, D.C., she canceled on short notice an appearance before the conservative Clare Boothe Luce Policy Institute, that was to be held in the Republican’s Capitol Hill Club. She also bailed on an interview with the conservative Washington Times.

It’s unbelievable that the GOP, which so often accuses the media of “Palinizing” conservative women, would begin elevating such an unknown quantity as Prejean without vetting her – well, on second thought, maybe it isn’t that unbelievable. In any event, Vivid Entertainment, which the other day renewed its offer to pay Prejean $1 million to appear in one of its hardcore films, has now reportedly obtained her video and plans to market it.

“Carrie Prejean,” Sean Hannity wrote in her book’s forward, “has rapidly risen to national prominence because she wouldn’t just shut up.”

That, perhaps, and the fact that she just wouldn’t stop exposing herself for a stranger. Perhaps now Sean Hannity or GOP chair Michael Steele will find themselves on the receiving end of new videos from the ex-Miss California.