If we, as a nation, can’t look to our “American Idols” for guidance, then who can we look to? Carrie Underwood is drawing some harsh criticism for liking a video of conservative commentator Matt Walsh denouncing school mask mandates on Twitter.

Although Walsh’s tweet is from last week, the revelation that Underwood had liked it began circulating Tuesday on Twitter, with fans describing her actions as “embarrassing and dangerous.”

Walsh wrote a series of tweets on the matter practically as soon as Underwood’s name began trending.

“Carrie Underwood liked my video and now the mob is coming for her,” he wrote. “She should know better than to like something that they don’t like. This is an unforgivable sin.”

“How long before Carrie Underwood officially renounces me? I give it 12 hours, tops,” he tweeted, before back-tracking just in case she doesn’t. “I could be wrong though. I’m basing this on our general experience with celebrities who face public backlash from the left. In fairness, she could be the outlier. Time will tell.”

“Like anyone else, I am upset and disturbed that Carrie Underwood liked one of my tweets. She should know better than to indirectly endorse the opinions of an extremist and scoundrel such as myself. Her lack of judgment is appalling. I demand that she renounce me and apologize.”

In the video, shot at a Nashville school board meeting, Walsh makes a number of demonstrably false statements, including that COVID poses “almost no threat to our kids at all,” and that making children wear masks can be classified as “child abuse.”

Although Underwood has voiced support for progressive issues (namely gay marriage) in the past, like many singers in her genre, she’s said she opts to “stay far out of politics,  at least in public, because nobody wins.”

Reactions to the country star’s true colors seemingly revealing themselves ran the gamut from heartbreak to “well, what did you expect?” Check out some of the highlights. 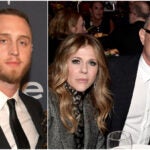 Also Read:
Chet Hanks Sticks by Anti-COVID Vaccination Stance: ‘I Have The Right to Not Get That S—‘