I still remember the moment I was handed my first assault weapon.

It was 1990, and I was a scrawny 18-year-old Israeli kid at the start of my three-year mandatory military service. I decided to follow in the footsteps of my dad, uncle and two brothers, and tried out for the Israel Defense Forces’ 35th Brigade, also known as the Paratrooper Brigade — one of the IDF’s toughest assignments.

The automatic rifle, called a “Galil,” came with a stern warning: If you lose it, expect to go to prison for a long time. It was a scary thing to hear at 18. But I suspect that was the intended effect. Lost guns can, and do, end up in the hands of terrorists.

It was an odd thing, looking back. We slept with our guns under our heads and walked around with them slung over our shoulders everywhere we went. Since my time in the IDF, I’ve lost more iPhones than I care to remember, and have locked myself out of every apartment I’ve ever lived in.

But for three full years, I couldn’t go to the bathroom without leaning my gun against the stall.

I was surprised to learn that I was, in fact, a talented shooter, able to disassemble and reassemble my weapon within seconds. That Galil became a part of me, no more foreign than my own two hands.

Since the Parkland school shooting in Florida this month, I’ve watched lobbyists and politicians on both sides of the aisle pointing to Israel as an example of a gun-filled country with little to no gun violence.

Also Read: How Late Night Hosts Tore Into Trump's Claim About What He'd Have Done During School Shooting (Videos) 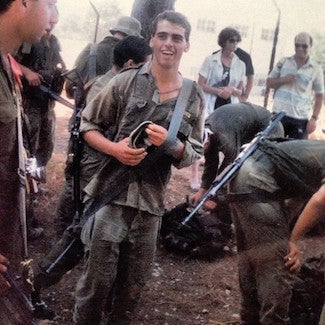 Hod at basic training graduation after a 62-mile trek, 1990

Despite an abundance of guns on any given Israeli street, outside of terrorist attacks, Israel has had one mass shooting: in 2013, a man killed four Israelis in a bank before turning the gun on himself.

“Just waking up in Israel to news of heartbreaking school shooting in FL,” Huckabee tweeted soon after the Florida mass shooting that left 17 students dead. “Reminded that Israel pretty much eliminated it by placing highly trained people strategically to spot the one common thread — not the weapon, but a person with intent. #PrayForParkland.”

NRA boss Wayne LaPierre has also cited Israel as a model, arguing its low number of shootings is a direct result of more guns on the streets and in schools.

Just waking up in Israel to news of heartbreaking school shooting in FL; Reminded that Israel pretty much eliminated it by placing highly trained people strategically to spot the one common thread–not the weapon, but a person with intent. #PrayForParkland

Also Read: Colbert on Trump's Claim He'd Have 'Run In There' During School Shooting: 'The Part I Really Don't Believe Is That He Can Run' (Video)

In fact, those comparisons — and many others by conservatives — strike me as flawed, at best.

While it’s true that guns are as ubiquitous in Israel as falafel stands, the Jewish state has some of the strictest gun-control laws in the world.

Unlike in the U.S., where loopholes in the system allow kids to buy weapons within minutes, even Israelis who have completed their military service may only apply for a gun license at 20. Those who did not serve in the military, for whatever reason, have to wait until they’re 27.

And forget about assault rifles — the best you can hope for in Israel is one pistol.

Also Read: Trump Blasts Florida School Shooting Response, Says He Would Have 'Run in There' Unarmed

Israel also has strict background checks. Applicants not only must prove they need a gun for protection, they also have to show a clean bill of health from their physician. Even then, chances are, you’ll be rejected. About 80 percent of the 10,000 people who apply yearly for licenses are turned down, according to the Associated Press.

“The problem in the U.S. is cultural,” Amir Ohana, a conservative Israeli Parliament member and former Shin Bet official (Israel’s equivalent of the FBI), told TheWrap. “We treat weapons as though they are always locked and loaded. If you have any mental health issues, you can forget about getting a permit.”

Israel’s Health Ministry and its Ministry of Homeland Security perform a cross-data check every three months to ensure that no one with mental health issues slips through the cracks, according to Ohana.

Also Read: 'Ellen' Hosts High School Shooting Survivors-Turned-Activists: 'It Could Have Been Me' (Video)

Ohana, who also serves as the head of the Knesset’s Gun Legislative Caucus, is pushing for looser gun-control laws in Israel. But he is still pushing a requirement for more training hours.

“I’m trying to bring the number of gun owners in Israel to about eight percent of the population,” Ohana said. “But that’s still light years away from what’s going on in America.”

How many Israelis have guns now? According to the Israeli Society of Gun Culture Enhancement, the country’s only gun lobby group, the number of civilians  who are given a gun permit is “minuscule.”

About 153,000 Israeli civilians currently own a gun, and another 120,000 permits have been given to security companies, the groups said. That’s anywhere between 1.7 and 3.2 percent of the population, estimated at 8.5 million.

Compare that to the U.S. where there are anywhere from 270 to 310 million guns — almost one per person — according to Pew Research Center.

Even ammunition is strictly limited to 50 bullets per gun. Gun owners in Israel also have to pass a mandatory training course and are required to renew their permits every three years, according to the Israeli gun lobby.

Despite the fact that most teachers in Israel are actually trained on how to use guns, they are not allowed to bring firearms into their classrooms, a spokesman for the Israeli Consulate in New York told the New York Post Monday.

It’s precisely because Israelis are so familiar with these weapons that they’ve been able to avoid the mass shootings epidemic that seems to have gripped the United States, said Alex Zohar, the head of the Israeli Society of Gun Culture Enhancement and a former Israeli Police chief firearms instructor.

“In the Jewish culture, life is sacred,” Zohar told TheWrap. “Taking someone’s life is only allowed as a last recourse. We don’t glorify use of weapons like they do in the U.S.”

I was quite happy, at the end of my military service, to hand in my rifle. To this day, every now and then, I still wake up from the same bone-chilling nightmare; in the dream, I’m walking around the base, and suddenly notice that my Galil is missing.

But the reality is, I managed to heed the warning I was given at the start of my service. I never lost that gun. And that, to me, is powerful ammunition for those who argue that strict gun control laws are the main component of the solution to the crisis in the United States.