The cable channel had said last spring that it was moving into live-action programming, announcing a slate of reality shows and scripted pilots. The reality shows have already launched; the new scripted series will begin production in January. 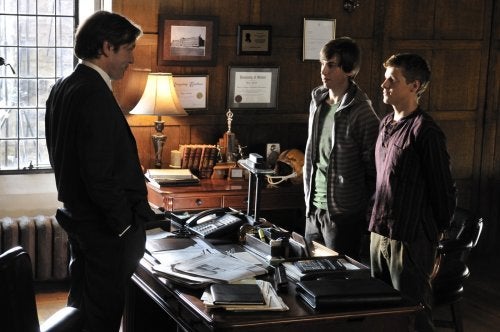 “These new series will offer our viewers a type of action-packed event entertainment not found anywhere else,” said Rob Sorcher, chief content officer of Cartoon Network. “We are looking forward to working with all of the great talent involved in these exciting new ventures, which we believe will be a powerful complement to our diverse and expanding array of original programming."

"History" and "Prep" were both on Cartoon’s development roster announced last May at its upfront presentation to advertisers. Here’s how the network describes both hour-long projects:

"Unnatural History" is an action-packed mystery series centering on Henry Griffin (Kevin G. Schmidt), a teenager with exceptional skills acquired through years of globe-trotting with his anthropologist parents. Shipped off to a high school in Washington D.C., Henry and his smooth-talking cousin Jasper (Jordan Gavaris) find themselves wrapped up in mysteries revolving around the national museum. The pilot was created and written by Mike Werb ("Face/Off," "The Mask"), who will be executive producer of the series. Emmy-winner Mikael Salomon ("Band of Brothers," "The Andromeda Strain") directed the pilot. The series will be produced by Warner Horizon Television.

"Tower Prep" is an action thriller telling the story of a rebellious teen, Ian (Drew Van Acker), who wakes up one morning to find himself trapped at a mysterious prep school focused on tapping into the "unique potential" of its students. Ian forms a secret group with fellow students CJ (Elise Gatien), Gabe (Ryan Pinkston) and Suki (Dyana Liu) as they search for answers to where they are and how to get home. The pilot was executive produced and written by Paul Dini ("Lost," "Batman: Arkham Asylum"), with Terry McDonough ("Breaking Bad") directing. The series will be produced out of Cartoon Network Studios in association with Dolphin Entertainment.

PHOTO: A scene from "Unnatural History"