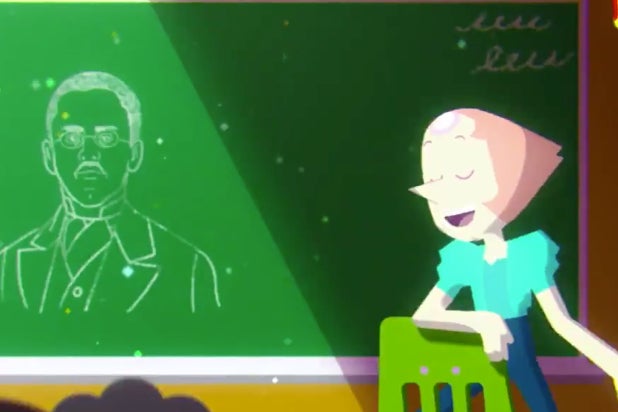 You might not have expected Cartoon Network (or Steven Universe) to be praised as “woke” by social media in 2020, but that’s pretty much where we’re at this year. The TV network recently released a short but effective anti-racism PSA that encourages viewers to “tell the whole story” by not viewing history though a white lens.

“Ask yourself as you’re learning… who is the focus? Why? Question the story,” Cartoon Network advised in a tweet accompanying the PSA, which hit the internet last week but has only recently gone viral as more people have discovered it.

Black inventors, heroes, and leaders are often left out of history. Ask yourself as you're learning…who is the focus? Why? Question the story ✊🏿✊🏼✊🏾✊✊🏻✊🏽💖

Narrated by Pearl, a character from “Steven Universe,” the clip begins with her schooling a class on the real inventor of the lightbulb. Turns out, that’s not Thomas Edison, but rather the Black inventor Lewis Latimer, who created the filament inside the bulbs and therefore made electricity affordable to everyone. But then things get dicey. Pearl goes off, asking why we’re teaching kids about Edison when we should be acknowledging why Latimer invented the filament in the first place: to provide a better living for people who had been freed from slavery.

It’s a fun PSA in the entertaining spirit of Cartoon Network, and more importantly, the way it’s presented makes it accessible to fans of all ages. At the same time, it does remind us that we’re often guilty of erasing Black history and Black creators in their most important moments. That’s where systemic racism really lays its roots — we learn about the most important creations and historical achievements through the eyes of white people, who in reality, were often boosted by the accomplishments of Black men and women who came before them.

Case in point: All Pearl had to do was mention Edison and her class immediately lit up, because he’s become synonymous with lightbulbs. But they certainly didn’t know about Latimer — until Pearl encourages them to “tell the whole story.”

Cartoon Network’s PSA was met with a flood of support and praise on social media, and rightfully so. Sometimes you just need a cartoon character to call out society’s shortcomings.