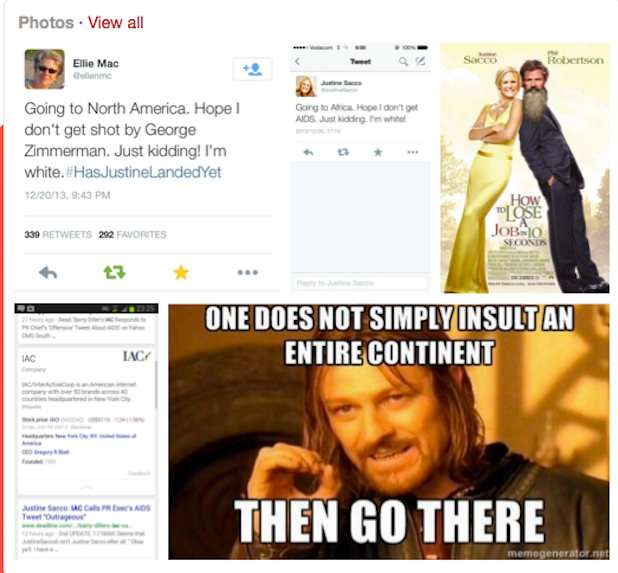 The case of Justine Sacco horrifies me. The PR executive made a numskull remark on Twitter – who knows why? – and within hours found herself at the center of a digital lynch mob, the object of global derision by thousands who felt entitled – in fact, thrilled – to condemn her.

Sacco was an easy target. She stupidly tweeted that she was going to Africa and hoped she wouldn’t get AIDS. And then doubled down on that stupidity by adding: “Just kidding. I’m white!” Then she got on a plane and was blithely offline while the tweet gathered steam, and more steam.

The comments ranged from people calling her “racist,” to “stupid” to “ignorant fool,” to others counting down the minutes waiting for her plane to land for what one Tweeter called “another amazing Twitter reality show.”

Google jumped into the fray – offering “justine sacco” searchers up a timeline of her flight – and Gogo inflight, the airplane internet service, felt compelled to share a point of view too (and later apologized).

Donald Trump chimed in – late to the party – tweeting “Justine, what the hell are you doing, are you crazy? Not nice or fair!… Justine is FIRED!”

#HasJustineLandedYet- Justine, what the hell are you doing, are you crazy? Not nice or fair! I will support @AidForAfrica. Justine is FIRED! — Donald J. Trump (@realDonaldTrump) December 22, 2013

Upon landing in Cape Town on Friday night/Saturday morning she’d become a global meme, #hasjustinelandedyet, and a magnet for vicious commentary.

Sacco, with whom TheWrap has worked on myriad stories with professionalism, deserved condemnation for the tweet. But she also deserved a chance to explain herself.

As sport in the Twitterverse, destroying Justine Sacco disgusted me. Some got the joke, and the grotesque lack of perspective. One @Baratunde  tweeted: ‏ Amazing how #HasJustineLandedYet results in Sacco’s firing in under 24 hours. Now, what about #HasABankerBeenJailedYet? #AnyBankerAtAll?

After two days of the tirade, another person tweeted: Gayle L. McDowell ‏@gayle 5h “Enough with the internet hate machine. It’s too much.”

One thoughtful person tweeted the question: Is it bullying if the person deserves it?

On Sunday Sacco apologized, profusely, saying: “For being insensitive to this crisis — which does not discriminate by race, gender or sexual orientation, but which terrifies us all uniformly — and to the millions of people living with the virus, I am ashamed.”

But by then it was too late. Sacco had already lost her job as the spokeswoman for IAC, the Barry Diller-owned parent of Expedia, Electus, The Daily Beast, CollegeHumor and other companies.

It is no surprise that Sacco would lose her job,  that was clear from the first moment. IAC has to look out for its interests, and with PR expertise like that, well… you get my point. But – the mob. It makes no moral equivalence between true crimes and careless remarks. The mob just likes to point and jeer and wallow in the fact that someone else gets to be the object of ridicule. South Africa could use our attention. The news stories in the wake of Nelson Mandela’s death remind us  that the country’s social and political struggles are serious – AIDS chief among them, violent crime a close second. That is worthy of debate and discussion.

But this incident is the worst of the social web.  Parents lock up your children’s Twitter accounts, lest they ruin their lives in a moment of careless sharing.