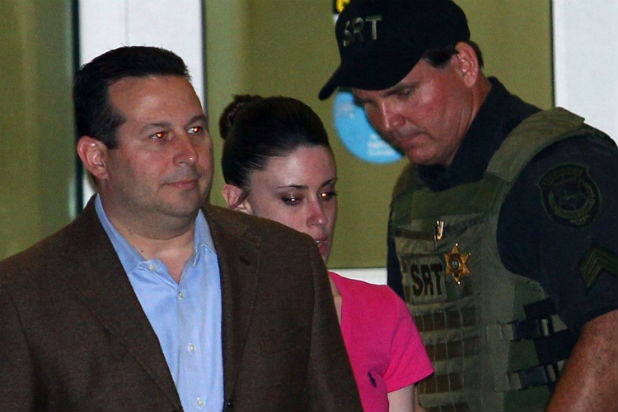 Casey Anthony’s former attorney Jose Baez has threatened to sue an investigator over allegations that he had sex with Anthony while she was his client, and that he once confided that she killed her daughter.

He added: “I have always conducted my practice consistent with the high ethical standards required of members of the Florida Bar. My representation of Ms. Anthony was no exception. Legal action is forthcoming.”

Last month, investigator Dominic Casey claimed Baez told him in 2008 that Anthony had in fact killed her daughter and hid the girl’s body, a crime that Anthony was acquitted of almost five years ago. Casey also claimed that Anthony paid Baez with sex because she lacked sufficient funds.

“Baez had told me that Casey had murdered Caylee and dumped the body somewhere, and he needed all the help he could get to find the body before anyone else did,” Casey claimed.

In 2008, Caylee Anthony’s body was found by a meter reader. In 2011, her mother Casey was found not guilty of the murder, after having been accused of suffocating Caylee with duct tape and dumping her body in the woods. Casey Anthony was, however, convicted of providing law enforcement officers with false information.

From 'Making a Murderer' to 'JFK': 11 Movies and TV Shows That Caused Change (Videos)

With SeaWorld vowing to stop breeding killer whales in the wake of the “Blackfish” controversy, here are other films and programs that made a real-world difference

"Blackfish" -- The 2013 documentary "Blackfish," which blamed the death of a SeaWorld trainer on the increased hostility of killer whales held in captivity, proved to be extremely damaging to the park. Negative press and decreased attendance eventually led the park to bring an end to its orca breeding program.
View In Gallery