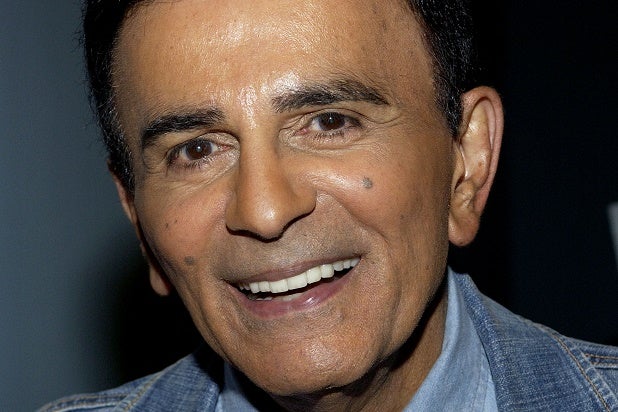 Legendary radio icon Casey Kasem, who became a household name as host of the “American Top 40” countdown and as the voice of  Shaggy on the animated series “Scooby Doo,” died Sunday after a long illness. He was 82.

Kasem suffered from Lewy body disease, a progressive form of dementia, which left him unable to speak, eat or move on his own. He was transferred to hospice care in Washington state shortly before his death following a weeks long bitter battle between wife Jean Kasem and his kids over his medical care.

In a statement to TheWrap, an attorney for Kasem’s children confirmed: “Casey Kasem passed away at 3:23 AM this morning at St. Anthony’s Hospital in Gig Harbor, WA. He was surrounded by Kerri, Mike, Julie and close family and friends. No cause of death given at this time.”

“Early this Father’s Day morning, our dad Casey Kasem passed away surrounded by family and friends,” Kerri Kasem wrote. “Even though we know he is in a better place and no longer suffering, we are heartbroken. Thank you for all your love, support and prayers. The world will miss Casey Kasem, an incredible talent and humanitarian; we will miss our Dad. With love, Kerri, Mike and Julie.”

Also read: Casey Kasem’s Final Days: How the Family’s Bitter Battle Got to This Point

On Jul. 4, 1970, Casey rose to fame as the host national radio show “American Top 40.” The weekly program, which featured Kasem counting down the most popular songs in the country, became a smash hit and remained on the air until 1988. Kasem re-launched the show in 1998, which Ryan Seacrest currently hosts.

Kasem was also the voice of Shaggy on the animated series “Scooby Doo,” and he had parts in several movies including the 1967 film “Mouth,” “Knife” in 1969 and he had a small role in “The Cycle Savages,” which starred Bruce Dern, according to Kasem’s IMDB page.

A graduate of Wayne State University in Detroit, Kasem began his radio career in Flint, Michigan in the early 1950s. He was soon drafted into the Army and served in Korea, where he worked as a disc jockey and announcer on the Armed Forces Radio Korea Network.

Once he returned to the U.S., Kasem continued to develop his radio skills, first working as a DJ at radio stations in San Francisco, Oakland, Cleveland, Buffalo and Los Angeles.

The radio personality’s final years were marred by a bitter family dispute over his care, between his wife Jean and his children from an earlier marriage.

In May of 2014, Kasem’s children reported him missing, prompting Los Angeles Superior Court Judge Daniel S. Murphy to order an investigation into the star’s whereabouts. An attorney representing Jean told the judge that Kasem was out of the country, but could not offer specifics as to where he might be.

Days later, Kasem was found at a friend’s residence in Washington state. The sheriff’s office in Kitsap County, near Seattle, tracked down the ailing broadcaster, who was with Jean. Sheriff’s officials said Kasem appeared to be in good condition. “We know he has an affliction, but he was alert, upright, dressed, groomed and cognizant of what was going on,” Deputy Scott Wilson told Fox News. “We see a lot of at-risk adults and children. This wasn’t anywhere close to being suspicious.”

A short time later, a judge granted his daughter Kerri Kasem expanded powers to look into the entertainer’s health. The family saga continued to take a series of bizarre turns.

On May 30, the family lambasted Jean in an exclusive statement to TheWrap. “Jean is intentionally causing her husband pain by adding further stress which is the worst thing you can do for anybody suffering from dementia,” the statement said. “Within the last year, Kerri, Mike and Julie have been blocked from seeing their father. The few short visits they received, the kids never once mentioned the dispute. They knew any additional stress would be harmful to his condition. Kerri, Mike and Julie are again devastated by Jean’s poor judgment.”

Also read: Casey Kasem Was on Vacation, Not in Danger, When Found in Washington

A few days later, Jean threw raw meat at Kerri, who brought an ambulance to the home where her father was staying to transport him to the hospital. Casey Kasem was moved to St. Anthony Hospital in Gig Harbor, a suburb of Seattle, on Jun. 1.

A few days later Kasem was transferred to hospice care to live out his final days. Then on Jun. 11, his children were given the go-ahead by a judge in Los Angeles to withhold medication, food and fluids. The decision reversed a ruling that the same judge had handed down just days earlier, ordering the continued feeding of the ailing entertainer, at Jean’s request.

The judge said he changed his mind after receiving medical records from Washington, indicating Kasem was not responding to artificial nutrition. “It would be acutely harmful for Mr. Kasem to have nutrition and hydration restored at this time,” the judge said.

On Jun. 12, a spokesman for Kerri told TheWrap that Casey was no longer receiving food, water or nutrients, and that he didn’t have much time left.

Casey Kasem died at the age of 82.

Listen to the audio below of Kasem’s radio program: