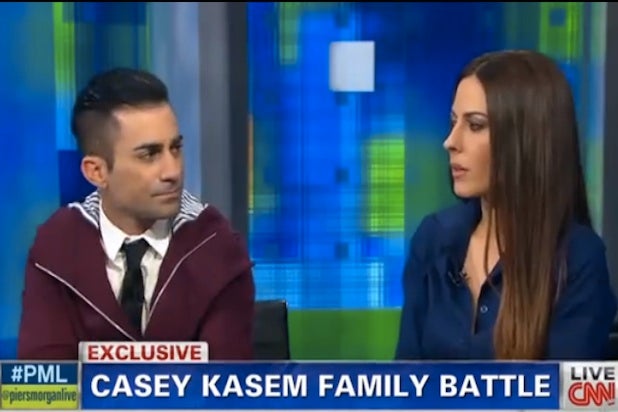 Before legendary radio host Casey Kasem went missing on Monday, his kids, Kerri Kasem and Mike Kasem, spoke publicly with Piers Morgan in December about their struggle with their stepmother, Jean Kasem, over visitation rights.

A judge ruled Monday that Kerri would become her father’s new temporary conservator. During the hearing, Jean Kasem’s lawyer, Craig Marcus, told the judge, “I have no idea where he is.”

The siblings were emotional about the strain the estrangement was putting them through during their CNN appearance late last year.

“There’s been a resistance for so long, ever since my father married her,” Kerri told Morgan. “It’s been a very long time.”

“I just came in from Singapore where I work. I didn’t know if I was ever going to be able to see him again,” Mike Kasem added. “I was so happy to just even get that 20 minutes I got. To see him was just the most special thing to me because I was able to quickly — actually I only got five minutes at that point — I was able to tell him all the things that I needed to say, just in case that was the last time I’d ever see him, so that was very special.”

“My father’s biggest joy in life was his family and his friends,” Kerri said. “He always loved to have gatherings. We’d have our Lebanese food and play our cards and have family time. That was so important to him. When we did see him, we had so very little time with him … It’s like, take the person that you love most on earth, know that they’re sick, know they want to see you — you get 20 minutes with them before being ripped away by an armed guard and having them say ‘please stay’ and you can’t.”

A CNN spokesperson told TheWrap that Kerri Kasem will appear again tonight at 9 to address her father’s disappearance.