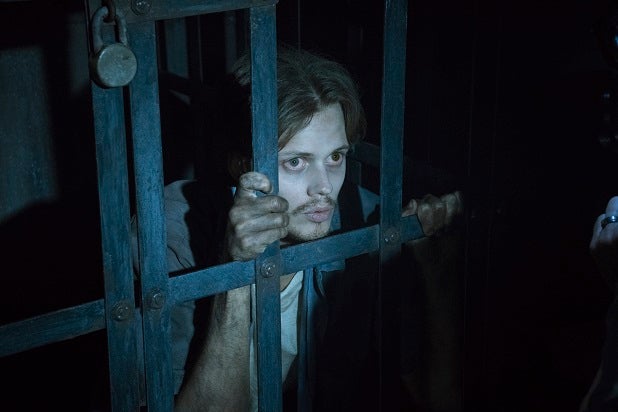 (Note: This post contains spoilers for the finale episode of “Castle Rock.”)

The final moments of the first season of “Castle Rock” wrapped up most of the plotlines of the show, but it also ended with a whole lot of ambiguity.

In last week’s episode, the Kid (Bill Skarsgard) explained his own identity and where he came from to Molly (Melanie Lynskey). The Kid claimed he was the child of Ruth (Sissy Spacek) and Matthew Deaver (Adam Rothenberg) from another, parallel reality — and that he’d been trapped in this world by Shawshank State Penitentiary Warden Lacy (Terry O’Quinn) for more than 15 years.

The Kid wanted Henry (Andre Holland) to take him to the woods, since Henry could see the gateway between the worlds that would allow the Kid to travel back to his home reality.

The episode ends with a time skip that finds that Henry didn’t do what the Kid wanted. Instead, Henry climbs down into the bowels of the now-defunct Shawshank, to the cage where the Kid was found — and we see that he has locked the Kid back up, the same way Lacy did.

The Kid insists that he is trapped in the wrong reality, an alternate version of Castle Rock, and that the same thing happened to Henry when he was young — Henry just doesn’t remember. Eventually, he will, the Kid says, and when that happens, Henry will release him. Henry doesn’t seem to believe him, though. In the last seconds of the episode, Henry leaves the Kid in the darkness with some food, and a flicker of a smile crosses the Kid’s face.

So what does it all mean? There’s room for interpretation, but the Kid’s final reaction to Henry imprisoning him pushes one major one: that Warden Lacy might have been right about the Kid’s actual identity.

At the start of the show, when Lacy commits suicide, we learned that he imprisoned the Kid because he thought he was the devil, thanks to the horrific things that happened wherever the Kid went. Last week, the Kid appeared to explain why that was the case: He claimed to be from another universe, an alternate Castle Rock, and the fact that he was trapped in a universe that wasn’t his own created the weirdness that made tragedies happen around him.

It seems, though, that Henry didn’t buy it. When the Kid dragged Henry at gunpoint out into the woods in order to make Henry help him find the gateway between the realities, Henry managed to get the gun away from the Kid. Rather than helping him get home, the time skip reveals that Henry put the Kid back in the cage — so obviously he never found the gateway that the Kid claimed was real.

So what’s happening here, and why is the Kid smiling? One way to look at it is that Lacy was right, and Henry believes his interpretation: The Kid really is the devil, or at least some kind of monster. And Henry is staying in Castle Rock in order to make sure the Kid stays in his cage and can’t harm anyone else.

The thing is, the Kid told his story about coming from another universe, and he claimed that Henry also crossed that barrier and was trapped in the other reality for years — but Henry can’t remember those events. The only place that information comes from is the Kid, and it’s unverified. Like Matthew, Henry might be seeing this whole thing as the devil telling him what he wants to hear.

The turning point for Henry was the series of events that took place in the jail. He and the Kid were locked up together when a bus full of Shawshank inmates was brought in to be held in the jail. In the Kid’s presence, the prisoners staged a breakout, murdering all the deputies in the office, as well as Willie (Rory Culkin). As Henry watched the murders, the keys to the cell he and the Kid were held in came straight to the Kid’s feet.

Also Read: Looks Like Pennywise Beat Up James McAvoy on the Set of 'IT: Chapter 2' (Photo)

That moment recontextualizes everything that happened with the Kid throughout the series. The Kid previously acted like tragedy followed him almost accidentally, as a result of him being out of place in this universe. But when Henry sees the Kid get exactly what he wants out of the tragedy in the jail, he sees the Kid’s intent — the way he uses horrific things to get what he wants. The same thing was true of the shooting at Shawshank earlier in the season, and the off-screen arson at Juniper Hill, the mental institution where the Kid was housed once he was released from the prison.

When Henry and the Kid are in the woods and Henry gets the gun, there’s a brief moment that confirms what Henry already fears. As he’s pointing the gun at the Kid, the Kid’s face briefly changes — it contorts and turns hideous for a split-second. Henry seemingly gets a look at the monster inside.

So, if the Kid really is the devil, or at least some kind of evil manipulator, there’s still the question of why he smiled in the last moments. The smile suggests the Kid succeeded in whatever his goal was, even if he’s still caught in the cage. That’s a powerful piece of evidence for the Kid being the devil, in fact; he doesn’t mind being incarcerated, because he managed to keep Henry in Castle Rock, and turn him into his jailer.

In a major way, the Kid has corrupted Henry, convincing him to do something that caused Lacey to kill himself. The Kid even mentions how the same thing that Henry is doing didn’t work out so well for Lacey.