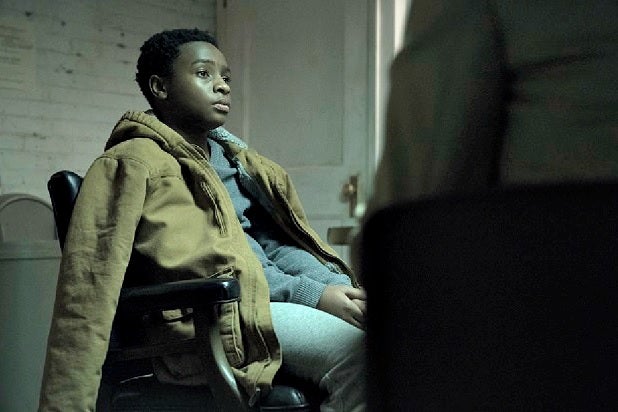 (Note: This post contains spoilers for the Sept. 11 episode of “Castle Rock.”)

The final episode of “Castle Rock” runs two stories in parallel: the present action that has the Kid trying to convince Henry to help him, and the past, in which we finally see (some of) what happened to Henry when he was 12.

We’ve been getting tidbits of this story all season, partially because Henry doesn’t seem to remember all of it, and partially because he refuses to tell anyone what really happened. The broad strokes that everyone in Castle Rock knows are these: One day, Henry Deaver (André Holland, with his younger counterpart played by Caleel Harris) went into the woods with his adopted father, Reverend Matthew Deaver (Adam Rothenberg).

Later, Matthew was found at the base of a cliff, badly hurt from a fall and near death, and Henry had disappeared. Search parties looked for Henry for the next six days. Meanwhile, Matthew hung on and seemed like he might even recover while being nursed at home over the next few days, but then abruptly died in his bed, seemingly succumbing to his injuries.

When Henry was found six days after he disappeared out on the frozen Castle Lake, he hadn’t been hurt, nor had he suffered any ill effects from the cold. It seemed that he had been inside and well-cared for during those six days. Because nothing seemed to be wrong with him, the people of Castle Rock started to speculate that Henry had pushed Matthew and gone to hide out somewhere, faking his disappearance.

Whether Henry, as a boy, actually tried to kill his father has been an open question all season, and something that clearly plagues Henry. The final episode, “Romans,” answers the question definitively by showing us what happened to Henry and Matthew that day. The pair went out into the woods to hear the sound that Matthew called the Voice of God and that others have called “the schisma.” There, Matthew told Henry that he meant to kill Ruth Deaver (Sissy Spacek), his wife and Henry’s adopted mother.

Matthew tells Henry that he knows about Ruth’s affair with Sheriff Pangborn (Scott Glenn, with his younger version played by Jeffrey Pierce). That transgression, and her encouraging Henry to lie about hearing the schisma in order to protect himself from the increasingly erratic Matthew, are sins that Matthew uses to justify his plan to get rid of her. The name of the episode is a reference to Matthew’s biblical reasoning for killing Ruth. He quotes Romans 6:23: “The wages of sin is death.”

When Henry hears this, he realizes what he’s dealing with when it comes to his father, and runs away from him in the snowy wilderness. In a great callback to “The Shining,” Stephen King’s story about a father trying to kill his son, Henry runs out to the cliff above Castle Lake, then carefully steps back through his own footprints so he can trick Matthew. He hides in the woods and waits for his father to follow his prints to the cliff. When Matthew does, Henry pushes him over the side.

We know that Matthew survived the fall, though, and we also know that it wasn’t Henry who ultimately killed his dad. Henry’s former friend and neighbor in Castle Rock, Molly Strand (Melanie Lynskey, with Cassady McClincy playing the character as a child), told Henry that she actually killed Matthew in his bed after his fall.

Molly told Henry that she could sense the fact that Henry wanted Matthew dead, and that’s what made her do it for him. In fact, she said, it was as if Henry completed the act of murder through her.

Also Read: Looks Like Pennywise Beat Up James McAvoy on the Set of 'IT: Chapter 2' (Photo)

In the end, Henry’s act was to protect his mother from his frightening, ever-more deranged father. Henry even asked the Kid what would have happened in the other world — and the Kid (Bill Skarsgård) agreed that Matthew would have murdered Ruth, but in the Kid’s version of Castle Rock, Ruth and Pangborn took the Kid and left town.

Whether Henry believes the Kid, or believes that he was justified in what he did to Matthew, is another story. After all, as Matthew said, the devil tells people what they want to hear.