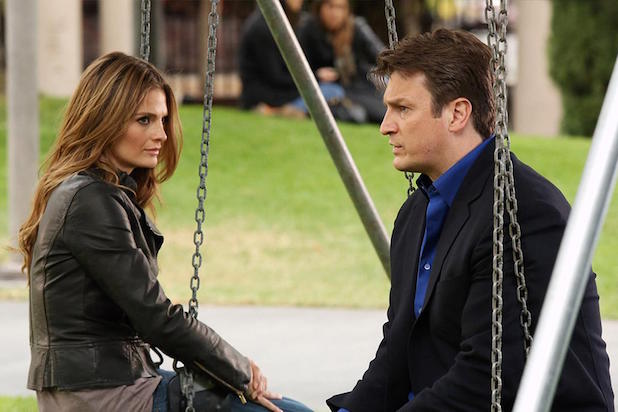 “Castle” is over, but the gratitude that series star Stana Katic has for the fans of the show continues.

Katic, who played Detective Kate Beckett on the series for eight seasons, hit up Twitter early Friday to share a hand-written thank you  note.

“Dear ‘Castle’ fans, cast & crew,” Katic’s note began. “Your devotion to our show has carried us for these unforgettable 8 seasons.”

The actress, whose departure from the series was announced in April, continued, “I’m lucky to have met & worked with & for the lot of you. I will always be grateful.”

Meanwhile, Katic’s costar Nathan Fillion has remained silent on the cancellation. His most recent tweet, dated May 9, reads, “Fartoflage: a noise someone makes to cover the sound of flatulence.” (UPDATE: Fillion has since broken his silence on the “Castle” cancellation. Read his reaction here.)

“Castle” wasn’t alone in getting the ax Thursday; a slew of shows met their end. Along with “Castle,” ABC said farewell to “Nashville,” “The Muppets,” “Galavant, “The Family” and “Agent Carter.” Fox, meanwhile, chopped “Grandfathered,” “The Grinder,” “Cooper Barrett’s Guide to Surviving Life” and “Bordertown.” CBS cut “CSI: Cyber,” while The CW bid adieu to “Containment.”

Fartoflage: a noise someone makes to cover the sound of flatulence.