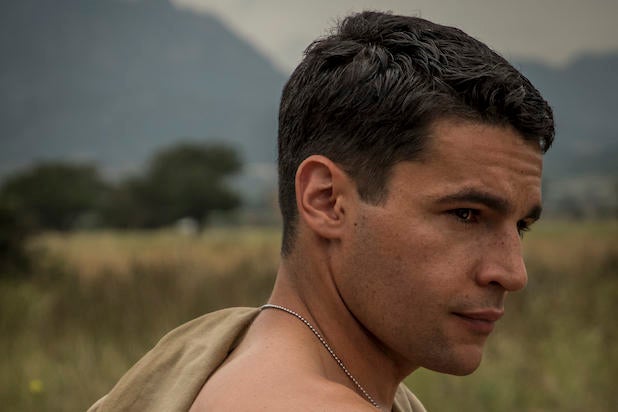 Fans of Joseph Heller’s classic World War II novel “Catch-22” know that John Yossarian spends a significant amount of time fully nude. So when Christopher Abbott signed on to play the bombardier protagonist in Hulu’s six-episode limited series adaptation of the book, he knew he was getting himself into getting out of his clothes.

But Abbott tells TheWrap he was perfectly fine with that, even when it meant doing a scene in which star George Clooney (who plays rapidly-promoted training officer Scheisskopf) inspects his testicles with a pencil after they get “blown off” (Yossarian’s words, not ours) during a mission. Though that’s also because Abbott tells us those testicles weren’t actually his testicles.

“Well, I am method. No, no,” Abbott joked. “It isn’t a testicles scene, is it? It’s really a testicles sequence. There is a lot that revolves around that. [Yossarian] actually getting shot in the plane is really scary but also quite funny. And how his testicles are dealt with from there on after is really funny. The shot of George fondling my testicles with a pencil — those weren’t my testicles, those were stunt testicles, little fun fact for you — but it’s hard to keep a straight face and care so much about my nuts.”

As fun as that ridiculous pants-dropping moment is to watch, Yossarian’s full-on nudity actually comes a bit later, when he strips in protest after the shocking death of radio gunner Snowden. And when it came time for Abbott to wander around outdoors and climb up into a tree in the buff, he did it willingly as the character but not without a little apprehension as an actor.

“Being nude in anything couldn’t be more justified than it is for this because it’s such a big part of the book, too. It’s a character thing,” Abbott said. “So of course I knew going into it that was going to be the case. But, yeah, it doesn’t make it that much more comfortable. It’s also being nude in situations that — if you’re doing a sex scene, you’re meant to be nude and that’s expected, but these are situations that I think are that much more vulnerable because of the state of where the character is.”

Abbott is never actually shown fully nude on screen and he was able to wear some strategically placed fabric on set while shooting a few scenes, but the awkwardness still came on two levels.

Also Read: 'Catch-22': Everyone Tries to Get Out of World War II in George Clooney's Hulu Limited Series (Video)

“So he’s walking out on a tarmac and for a character that’s, you know, very vulnerable,” Abbott said. “But then as a person, you’re walking out on to a tarmac with like 70 extras around and outside and with the crew and everything like that. But in a way it kind of helped because it just added to the vulnerability of it.”

All six episodes of “Catch-22” are now streaming on Hulu.