CBS All-Access show “The Good Fight” is being heavily criticized after the show’s Twitter account shared an image from a recent episode with a list of words including “Assassinate,” “President” and “Trump” coupled together.

The since-deleted tweet was posted last Friday. You can take a look at it below: 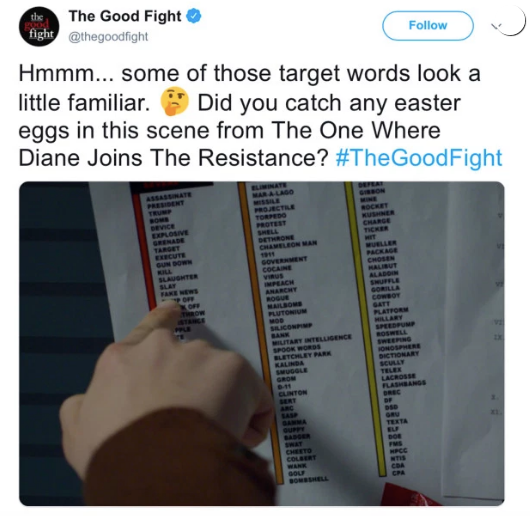 It’s hard to see on first glance, but the list of words also includes “eliminate” and “Mar-A-Lago,” in reference to the president’s Florida resort.

“Hmmm… some of those target words look a little familiar. Did you catch any easter eggs in this scene from The One Where Diane Joins The Resistance,” the tweet’s caption said.

CBS responded to TheWrap with the following statement:

“A social media post for ‘The Good Fight’ displayed show content that, when presented in isolation, outside of the context of the show, created an impression and provoked a reaction that was not intended.

The tweet showed a screengrab from the show’s fictional NSA office, including a list of standalone “target words” the series’ NSA characters should look out for while conducting anonymous wire taps in an effort to protect the President and the public. However, the tweet was regrettably posted without that context, in an effort to direct fans to find an ‘Easter Egg’ clue, in reference to a past character on ‘The Good Wife,’ Kalinda, listed in the second column of the list, and the fact that the NSA is still monitoring her in the fictional world of the show.

The post was perceived very differently than the intended result and has since been removed.”

That context was missing for several upset users on Twitter, who blasted the show and the network.

“This is not a coincidence. It’s a message to nut jobs. The Secret Service needs to investigate this and find out who put this out on behalf of CBS,” one upset user tweeted.

“Just stopped watching anything having to do with CBS, and especially, The Good Fight. Inciting political violence? Advocating for the assassination of Donald Trump? Have you all lost your minds? I’ll be contacting your advertisers,” another user tweeted in response to the now-deleted post.

There were a few other political names on the list as well, including “Kushner” and “Mueller.”