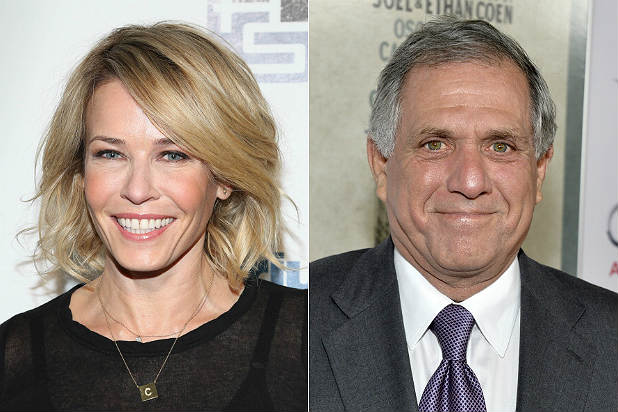 Chelsea Handler is in talks with CBS for a late-night talk show, an individual close to the producer and E! talk show host told TheWrap.

CBS contacted Handler to discuss the potential of hosting a syndicated show in the wake of her announcing this week that she’s leaving E! when her contract expires at the end of the year. But Handler has told CBS that she isn’t interested in that option. As a result, CBS then expressed interest in considering Handler for Craig Ferguson‘s 12:30 a.m. slot.

She will be meeting with CBS Corp.’s chairman and CEO Les Moonves in the next few weeks to continue the discussions of joining CBS’s late-night lineup, the individual said. But, Letterman’s retirement announcement on Thursday has changed the landscape for her. Handler now has her eye on Letterman’s “Late Show” spot instead. Either timeslot would make her the first woman to host a late-night broadcast show since Cynthia Garrett hosted NBC’s “Later” from 2000-2001.

Of course, she’ll have to prove to CBS that she can break out of her niche audience and appeal to a more general audience for CBS to consider her for the spot.

A role with CBS is just one of the projects that Handler has been considering. Ideally, she wanted a weekly radio show on Sirius XM with a taped version of the show on Netflix, the latter of which she’s already in talks with, according to the individual. (Netflix told TheWrap that Handler had not been in talks with the company about a show.)

The insider said that she has also been approached by Jeff Zucker for CNN or HLN and by FX. But, again, the Letterman spot has changed things for her. It is now No. 1 on her list.

The CBS-Handler talks would also suggest that the network was at the very least entertaining a replacement for Craig Ferguson at 12:30 a.m. The “Late, Late Show” host reportedly has right of first refusal for Letterman’s spot, although CBS may not want to give it to him.

Also read: How Letterman Broke the News to His Staff – and Les Moonves

Ferguson has been regularly falling to NBC’s “Late Night” in recent years. When Jimmy Fallon hosted at 12:35, he topped Ferguson roughly five nights to Craig’s every one. And since Seth Meyers has taken over, his version has more than doubled Ferguson’s average rating in the Adults 18-49 demographic — though those numbers are inflated due to interest.

Editor’s note: An earlier version of this article mistakenly stated that Joan Rivers was the last woman to host a late show on a broadcast network. It was in fact Cynthia Garrett.