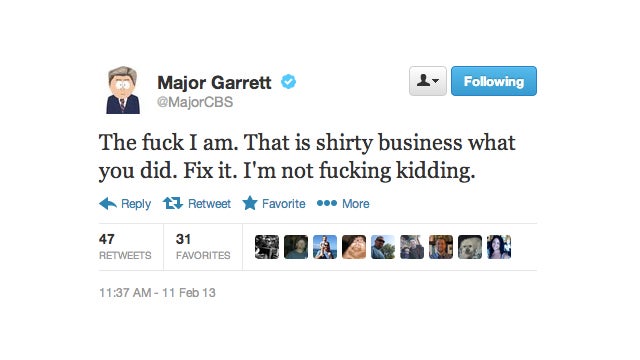 The reporter quickly deleted the tweet, which was perhaps meant to be a direct, private message.

Jim O'Sullivan, the White House correspondent for the National Journal, had cracked a joke about Garrett earlier: "Someone, @MajorCBS, left a thing of Cover Girl on the WH press men's room sink."

He then tweeted: "Confirmed: makeup contraband in WH men's room does NOT belong to @MajorCBS. Will investigate further"

After his message, Garrett seemed to confirm that Sullivan had drawn his apparent ire.

"Monday before SOTU [the State of the Union Address] is always slow. Pity," he tweeted. "I was speaking to @JOSreports. He knows why. I hear S#%* is REALLY hitting the fan in Damascus."

CBS did not immediately respond to requests from TheWrap for comment.