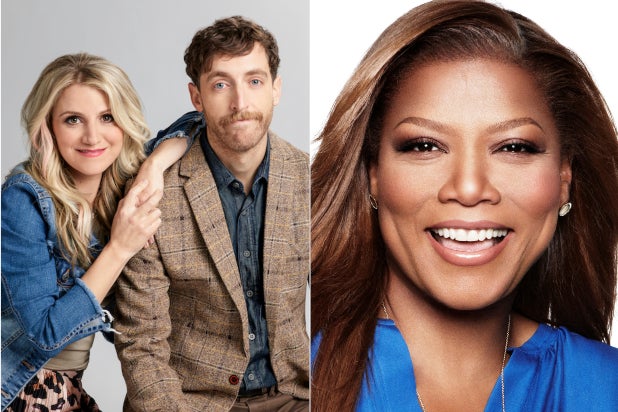 Despite the ongoing impact from the coronavirus pandemic, which has shuttered production across the entire TV industry, CBS is tentatively going ahead with a normal-looking fall schedule.

The network will debut two new series in the fall and one more at midseason.

The latest comedy from Chuck Lorre, “B Positive,” will get the slot behind “Young Sheldon” on Thursdays at 8:30 p.m., which will bump sophomore “The Unicorn” to 9:30 p.m. where it will air behind “Mom.” Queen Latifah’s “The Equalizer” will lead off its Sunday scripted primetime programming at 8 p.m., airing after “60 Minutes.”

“B Positive” stars “Silicon Valley” alum Thomas Middleditch as a therapist who becomes friends with his kidney donor (Annaleigh Ashford). It was one of the few pilots that had finished shooting before the pandemic forced everyone home. “The Equalizer” will see Queen Latifah step into the role played by Edward Woodward in CBS’ 1980s version, and more famously by Denzel Washington in a pair of movies.

Though CBS only has one new series slated for midseason – a sequel to “Silence of the Lambs” following FBI agent Clarice Starling – CBS Entertainment president Kelly Kahl told TheWrap it’s “possible” they could order more series. “We’re going to be piloting at least a couple more of our projects,” he said. “The tricky thing there is time. We are evaluating of all those projects on a daily basis. We like all our development and we want to try to give them all a fair shot.”

Fox and The CW, the only other networks to announce their fall plans, are safeguarding their schedules with acquired programming like Spectrum Originals’ “L.A.’s Finest” and canceled streaming shows “Swamp Thing” and “Tell Me a Story.” CBS, which is heading into its first season as part of ViacomCBS, does have a backup in case production is not able to safely resume. (Kahl is hopeful most can start up again in the summer).

“We are a company with a vast quantity of assets at our disposal,” he said. “If it turns out we need to put some programming on to buy some time until our fall shows are able to premiere, we have absolutely every confidence we can do that.”

Even if production is able to resume in time for the fall, Kahl said it’s unlikely that CBS will be able to have its normal late-September “Premiere Week,” where it debuts everything within a 7-day span. “I don’t think there is going to be a kind of a hard fast premier week like we’ve traditionally seen,” he added.

Also Read: The CW Delays Its New Season Until January

Below, find the full schedule for Fall 2020, new series in bold.