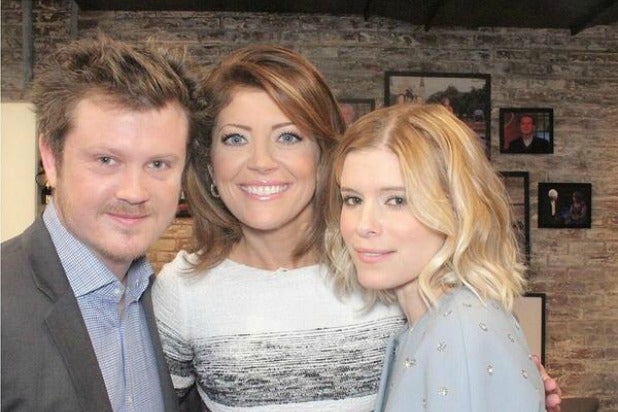 (Spoiler alert: This story reveals a huge thing that happens in Season 2 of “House of Cards. If you don’t want to know what it is, read this nice story instead.)

Even people who’ve never seen “House of Cards” got a big hint about a major surprise that happens this season, when “CBS This Morning” co-anchor Norah O’Donnell referred to Kate Mara‘s character in the past tense.

Also read: ‘House of Cards’ Spoilers: When Are We Allowed to Talk About That Huge Thing That Happened?

“Yeah, I typically loved her,” said Mara, referring to her character, journalist Zoe Barnes — dropping another hint that all isn’t well with Zoe.

(Pictured above: O’Donnell, center, tweeted a picture of herself with Willimon and Mara.)

“We told Kate from the get-go I always knew that Zoe was going to meet her maker in the first episode of season two,” he said.

Because Netflix unveils all the episodes in a season at once, “House of Cards” fans have always wondered when it’s okay to talk about spoilers. Since everyone watches at a different pace, no one knows when it is acceptable to say what.

But now we have the word of Willimon himself: It’s okay to share spoilers on national television, provided you first announce them. Repeatedly.