As TheWrap reported earlier today, CBS has unveiled what it’s calling the first use of video in a print ad, one that will be inserted into an undetermined amount of copies of Entertainment Weekly next month. 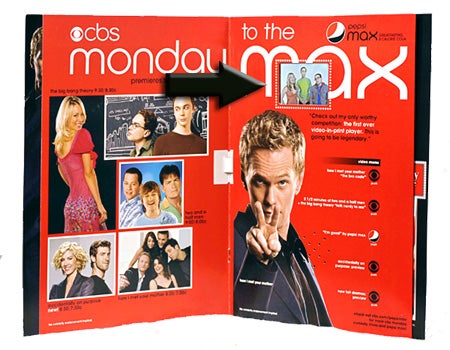 I’ve toyed around with the ad, and it’s relatively cool, as far as these things go — though I doubt it will impress anyone with a video-enabled iPod or iPhone. There are no playback options (though you can pause), no headphone jack, and the volume is set high enough to annoy fellow travelers using public transportation.

The impressive thing — unlike, say, Esquire’s overhyped e-ink cover — is how much video they managed to fit on a "paper thin" video player — 40 minutes – with a battery life said to be four-to-five hours and rechargeable through a USB port.

(About that "paper thin" claim — um, no. "Cardboard-thin" would’ve been more accurate.)

It’s also where they missed an opportunity – that is, to put an entire episode of one of these shows on the player. At the sitcom-length of 22 minutes (without commercials) CBS could’ve put the premiere of “How I Met Your Mother,” or even last season’s finale, on there, with 18 minutes of fall previews and Pepsi spots to spare.

At the breakfast unveiling, held in the CBS board room in midtown Manhattan, I asked George Schweitzer, president of the CBS marketing group, if that was ever discussed. “We talked about it,” he said. “But no one wants to watch an entire show like that.”

The goal of the ad, Schweitzer added, isn’t necessarily to get more people to watch its programming.

"There’s no way to measure ‘see the chip-watch the show-get the rating,’" he said. "It’s the cumulative effect."

Buzz, at least marginally, shouldn’t be a problem. Esquire’s e-ink cover spawned waves of praise, criticism and, as evidenced by dozens of YouTube videos, interest from the hacker community.