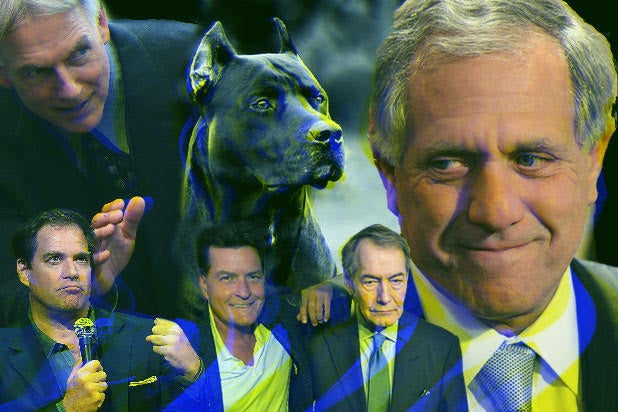 The bodies and the settlements at CBS keep piling up. There were two on Thursday alone.

Actress Eliza Dushku was secretly paid $9.5 million to settle her contract after she complained about sexual harassment from the star of “Bull,” Michael Weatherly, we learned in The New York Times.

This followed a revelation earlier in the day from Cybill Shepherd, the smart and sassy blonde on ’90s network television, that her show was canceled shortly after she rebuffed a sexual advance by CBS chief Les Moonves.

What happened when she complained? Did a human resources professional consult with her and make Weatherly take sensitivity training?

No, Dushku was written off the show after she confronted Weatherly. She got a check and Weatherly is still on the air. Weatherly apologized in the Times after having reflected on his behavior as “both not funny and not appropriate.”

In Shepherd’s case, she said Moonves invited her to dinner when she was the star of “Cybill.”  “His assistant and my assistant made a dinner date and we went to it and he was telling me his wife didn’t turn him on and some mistress didn’t turn him on,” Shepherd said. She turned Moonves down, left the dinner and “quite shortly afterwards” her show was canceled.

The pattern of behavior is undeniable at this point. Men who should have been called out for bad behavior instead protected one another. Women who dared raise their voices were punished and paid off, their careers set off course, shamed into silence.

The evidence of a toxic male culture at CBS is overwhelming, led by a chairman who had a staffer “on call” for oral sex.

Let’s take a brief look at some of what we have learned about what was tolerated and hidden at CBS:

And then there’s Moonves himself, accused of sabotaging the career of Ileana Douglas, accused of sexual misconduct by a dozen women, accused of demanding oral sex from at least four employees and having an employee “on call” for blow jobs, according to the internal draft report of a law firm’s investigation into network culture prepared for the network’s board of directors.

The draft has notably not been denied by CBS, which seems most concerned about all the leaks to the media.

Moonves, whom I had truly admired until very recently, built the success of the network on his unabashed male appeal. He created shows that had machismo and viscerally seemed to get the desires of middle American men. This showmanship drove the network to No. 1 status, always skewing male.

Moonves’ signature shows included “Two and a Half Men,” Jerry Bruckheimer’s “CSI” and the Harmon-led “NCIS” franchise. His hit CBS shows were the brawny “SEAL Team” and “SWAT” and “Magnum PI” and “FBI” and “Hawaii 5-0.”

If you wanted light entertainment, female stars and gay people  — say, “Will and Grace” — you had to go to NBC. “Ellen”? That was on ABC.

If toxic masculinity lay behind all this, I shudder to think of how that seeped into our broader American culture.

But how far will CBS go to change an environment that is clearly many levels of rotten? How many good shows with interesting female characters never saw the light of day because everybody knew how things went in the network’s executive offices? How many more board members were like the late Arnold Kopelson, whom the Times reported once said in a meeting:  “I don’t care if 30 more women come forward and allege this kind of stuff… Les is our leader and it wouldn’t change my opinion of him.”

CBS’ vice chairman is a woman, Shari Redstone. And I feel badly for the many good people at CBS who have nothing to do with this but are caught up in a culture that simply must change.

“The allegations in Ms. Dushku’s claims are an example that, while we remain committed to a culture defined by a safe, inclusive and respectful workplace, our work is far from done,” the network told TheWrap in statement. “The settlement of these claims reflects the projected amount that Ms. Dushku would have received for the balance of her contract as a series regular, and was determined in a mutually agreed upon mediation process at the time.”

I’m gratified to see CBS take note, but it remains to be seen if Redstone, her new board of directors and the traumatized leadership at the top will achieve the hard work of cultural change.