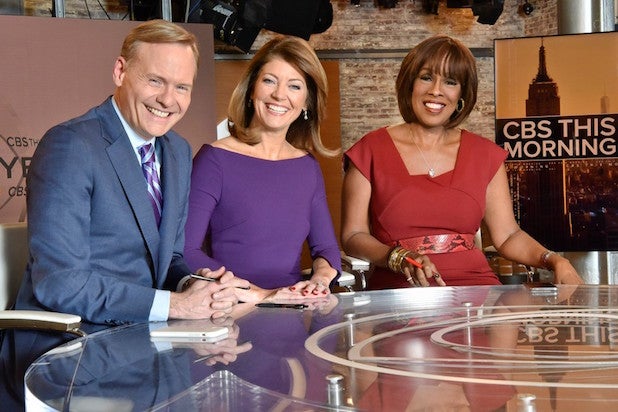 John Dickerson has been named the new co-host of “CBS This Morning,” the network announced Tuesday.

His first official day at the anchor desk will be Wednesday. The network also announced that it will name a new anchor for “Face the Nation” in the coming weeks.

“John’s impressive track record and strong all-around journalism extends our commitment to real news coverage every morning at CBS News,” CBS chief David Rhode said in a statement. “Gayle and Norah continue to show tremendous leadership on our morning broadcast each day. Colleagues, newsmakers and peers all appreciate the depth and context John Dickerson brings to every discussion of the day’s events — together with his co-hosts, he will project our best values on every broadcast.”

Dickerson takes the reins at a fraught time for the program which has consistently lagged in the ratings behind its broadcast rivals, ABC’s “Good Morning America” and NBC’s “Today” show.

“This is a new beginning with an old friend,” said Norah O’Donnell, offering her own vote of confidence. “I’ve worked alongside John for almost 20 years, and this is a great way to continue our mission of putting the news back in the morning.”

Rose has largely vanished from public life after a swirl of sexual misconduct accusations were made against him last November, forcing his ouster from “CBS This Morning,” “60 Minutes” as well as his eponymous late-night PBS talk show.

The news of Dickerson’s appointment was first reported by the Huffington Post’s Yashar Ali.