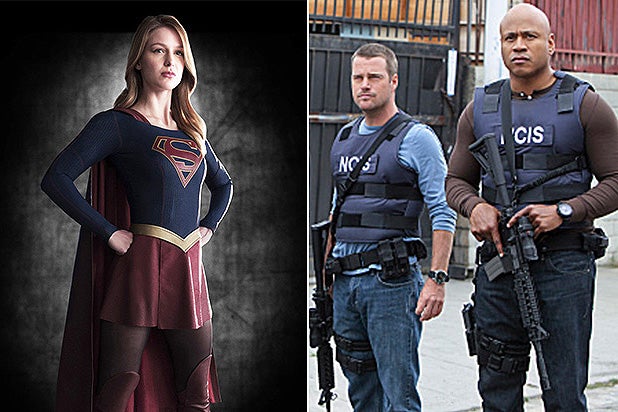 CBS is pulling previously scheduled terrorism-related episodes of “Supergirl” and “NCIS: Los Angeles” from its schedule Monday following the devastating attacks in Paris, TheWrap has learned.

Before Friday’s attacks, an episode of “Supergirl” dealing with bombings throughout National City had been set to air Monday, an individual with knowledge of the situation told TheWrap. Instead, it will be replaced at 8 p.m. by an episode titled “Livewire,” in which Kara’s (Melissa Benoist) Thanksgiving plans are threatened when she suspects her foster mother, Dr. Danvers (Helen Slater), who is coming to town, disapproves of her new role as a superhero.

The previously scheduled episode of “NCIS: Los Angeles,” which focuses on ISIS recruitment, will be swapped out at 10 p.m. for an episode titled “The Long Goodbye,” which sees the team searching for Jada (Ella Thomas), the woman Sam (LL Cool J) led to asylum in the United States four years ago, after she goes missing.

Friday’s terrorist attacks in Paris killed 129 and injured 352 others.

One attacker appeared to have arrived in Europe hidden among a wave of refugees from Syria, authorities said. However, European Commission head Jean-Claude Juncker cautioned that the attacker was a criminal and not a refugee.

Several arrests linked to the attacks have been made in Belgium. But it’s possible many others involved in the attacks remain at large, CNN reported Sunday.

“Supergirl” has been one of the season’s highest rated new series. Its most recent episode on Nov. 9, drew a 1.7 rating among adults 18-49 and 8.07 million viewers.

It is unclear when the previously scheduled episodes of “Supergirl” and “NCIS: Los Angeles” will air.

The most recent episode of “NCIS: Los Angeles” on the same night drew a 1.3 ratings a 7.91 million viewers.