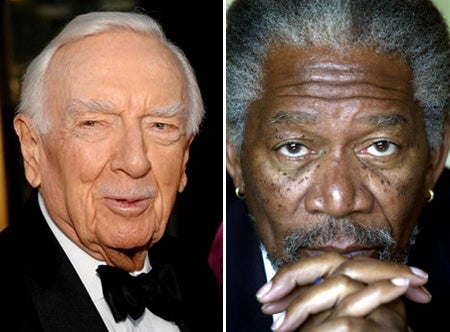 When Katie Couric took over the "CBS Evening News" in 2006, CBS had Walter Cronkite, the network’s legendary newsman, record her introduction. When Cronkite died last July, Couric made a point of saying they would keep the voiceover as part of the broadcast.

"As comforting as it is to look back on the great career that Walter had, we’re looking forward now and we just felt it was the right time to make the move that at some point had to be made," CBS News and sports president Sean McManus told the Associated Press.

Hey, I love Morgan Freeman. But getting a 72-year-old actor to be the "new" voice of your newscast ain’t exactly "looking forward."

McManus added: "This seemed like the appropriate time since Walter’s passing to make the move."

Cronkite’s voiceover – and voice in general – had been referred to at CBS as the "voice of God." It’s worth noting that Freeman has played that role on film – in the 2003 comedy “Bruce Almighty” with Jim Carrey.

Michael Douglas already does the voiceover for NBC’s “Nightly News,” leaving ABC’s “World News” with Diane Sawyer as the only network newscast without a celebrity voiceover.

My colleague Joe Adalian’s advice to ABC: Get Clooney.

Anyway, Media Decoder has the audio of Freeman’s intro, if you’re interested.