Shares of the publicly traded CBS Corporation are falling as Wall Street reacts to Leslie Moonves’ forced resignation after 15 years as CEO.

At the time of this writing, company stock was trading down almost 3 percent, which is about $1.50 per share. Shares of CBS stock closed Friday at $56.06.

Here is a snapshot of Monday’s early stock movement: 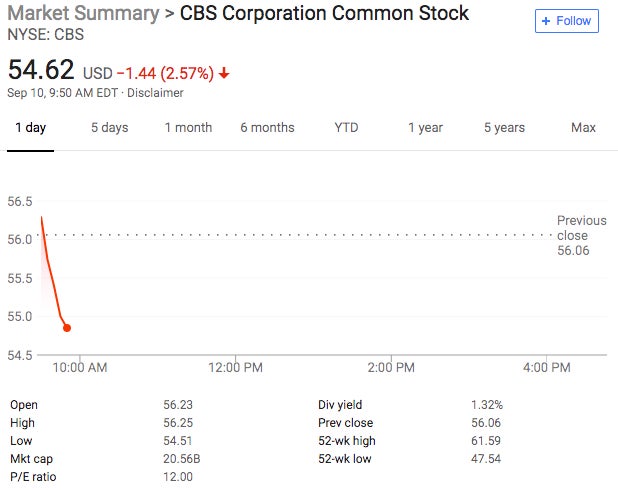 CBS and its controlling interest National Amusements, Inc. announced late on Sunday that Moonves would be leaving the organization after reports that the number of women accusing him of sexual harassment or assault had climbed to 13.

Joe Ianniello, who has served as the company’s COO since 2013, will take over as CBS’ president and acting CEO while the board searches for a permanent successor. The chairman position will remain open pending the appointment of a permanent CEO.

Additionally, CBS and National Amusements came to a settlement on pending litigation that was set to begin trial in Delaware next month. CBS and Moonves argued that NAI head Shari Redstone had shirked her duty to shareholders by pushing for a re-merger with Viacom, which CBS saw as potentially harmful to the value of the company.

Since then, Redstone changed her stance on supporting the recombination of the two companies. Now, her National Amusements has agreed to not propose CBS and Viacom merge for a period of at least two years.

Furthermore, NAI has reaffirmed that it will give good faith consideration to any business combination transaction or other strategic alternative that the independent directors believe are in the best interests of the company and its stockholders.

Also Read: Ousted CBS CEO Les Moonves to Get No Severance 'At This Time,' $20 Million to Go to #MeToo Groups

Moonves’ exit comes two months after Ronan Farrow’s bombshell report in the New Yorker, in which six women accused the longtime media mogul of sexual harassment. On Sunday, a new report from Farrow in The New Yorker outlined accusations of sexual assault and harassment from six additional women while Vanity Fair named a female physician who accused him of “forcing himself” on her against her will 19 years ago; he told the magazine, “I tried to kiss the doctor. Nothing more happened.”

An investigation by two different law firms into the various accusations against Moonves and other senior CBS officials is still underway, and any potential Moonves severance pay is pending the results. The company announced that $20 million of any severance would be donated to #MeToo-related organizations.

Moovnes joined CBS Corporation from Warner Bros. in 1995, when he was named president of CBS Entertainment. He became chairman in 2003 and was named CEO in 2006, following the split of CBS and Viacom.