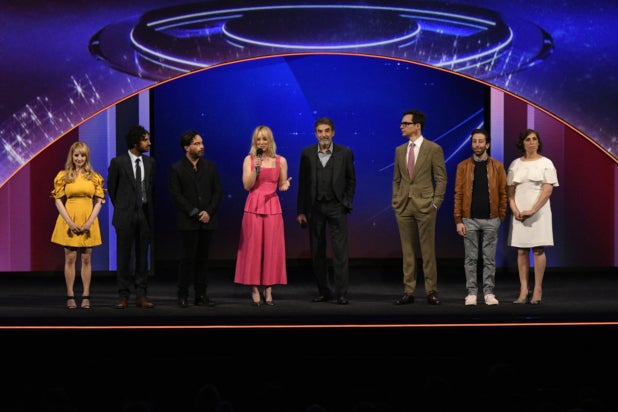 How do you get to Carnegie Hall? Well, first you have to pick up your CBS upfront ticket at its Black Rock headquarters, then you walk up a few blocks.

Below are seven things TheWrap took away while in attendance for Wednesday’s CBS upfront presentation.

CBS Fumbles Its Opening
After Fox went with a sports-themed “halftime interview” schtick, CBS went even further by having its top NFL team of Jim Nantz, Tony Romo and Tracey Wolfson do a pre-game intro for its Upfront. This allowed the network to smooth over the chaos of the past year (you may have heard their top exec had to resign) by describing them as “some changes.” Hey, at least Nantz knew exactly why he was there, coming out on stage and saying: “Hello friends… with money.” Also, it wasn’t as offputting as the millions of actual eyeballs on the screen as the show counted down to the start.

A Sendoff for “The Big Bang Theory”
You may have heard, but a certain CBS show is ending. One day before “The Big Bang Theory” ends its 12-year run, the cast and co-creator Chuck Lorre were brought out on stage to give one more big farewell. Guess it’s never too late to get in those (very) last-second ad buys. Lorre commemorated the occasion by reminding everyone that the show’s original pilot was… not the one that made it on the air. He recalled when former CBS Entertainment president Nina Tassler called him to say “it’s not very good. Would you consider doing it again?”

Finally, a Name for Patrick Stewart’s “Star Trek” Show
CBS All Access got a little love during the upfront courtesy of a brief sizzle reel, but there was actually a little bit of news at the end of that. Along with a showing a very brief look at Patrick Stewart’s long-awaited return as “Star Trek” captain Jean-Luc Picard, the company also finally gave his show a name. They kept it simple by calling it: “Star Trek: Picard.” More on that here.

“The Unicorn” Actually Might Fly
Those in attendance seemed to really enjoy the trailer for new CBS sitcom “The Unicorn.” Though he didn’t make it to Carnegie Hall, Rob Corddry sure helped elicit the laughter.

Walton Goggins, who plays the main character, got a little choked up about the experience in his post-preview speech. You’ve got our attention, guys — and more importantly, the attention of media buyers with thick wallets.

This afternoon, the two didn’t really interact and stood on opposite sides of their boss. To be fair, they’re also now on different shows. Oh, you didn’t hear? O’Donnell landed on her feet.

Corden also remarked that there was no way better way to spend a spring day in New York City “then by pouring over demographic figures from Season 38 of ‘Survivor.'” On the Tony awards (or “NCIS Broadway” as CBS calls them), which Corden will host, he said they’re “Just like the Oscars with none of the controversy and a fifth of the audience… If you love award shows but hate ratings, The Tonys is the show for you.”

Corden ended by saying he wanted to beat the rush to get a selfie with the cast of “Murphy Brown,” before being told the bad news. “Really? They went so big on it last year!”

Love for “Evil”
Robert and Michelle King’s new CBS series, about a pair of mismatched paranormal investigators, got a fervent response from the buyers in the crowd, which CBS hopes is a good sign for how viewers react when it debuts in the fall. Or maybe they were just terrified. It was pretty spooky for something you’d see on CBS.