It is, as are so many things in this bedeviling City of Angels, a constant pastiche of the worthy, the traditional, the transplanted, the craven and the outlandish.

Yet, as the rest of the continent falls into a deep freeze, it is heartening to find that in the SoCal realism, as it is, of the season, there is always a bit of magic in the air. Specifically at the Wiltern Saturday night. That’s where local punk legends X will be, to quote one of their tunes from the '80s, painting the town blue in what seems to be a hometown tradition in the making.

For its second annual Christmas concert at the Wilshire Blvd. 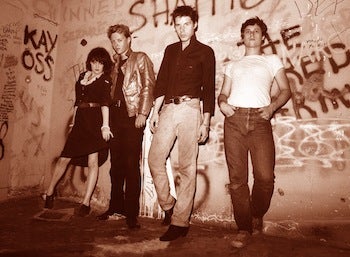 venue, X, joined by Calexico, will, in the characteristically blunt appraisal of drummer DJ Bonebrake, “make a lot of noise and rock the house.”

The show is the first of four the band will be playing in California in the last days of December, including a New Year’s Eve gig in San Francisco. No strangers to seasonal fun or a bit of cheer inducing profit, the band even recently released a pile driving “Santa Claus Is Coming to Town/Jingles Bells” digital single for the holidays.

But it’s not X’s Christmas spirit that has particularly changed — more the times and the venues. “In the '80's no one in the band had any family or holiday obligations so we celebrated with friends and fans at a local club,” says Bonebrake.

Still, as seems to happen if you hang in there long enough, you can ignore that the punks that sarcastically sang of more fun in the new world in 1983 have become a venerable institution.

"Hell, Los Angeles," which was the title of X’s first album back in 1980, even gave the band, who formed in 1977, an Official Certificate of Recognition from for their musical and cultural contribution to the city a few years back. That’s a very long way from the near riots depicted in Penelope Spheeris’1981 documentary "The Decline and Fall of Western Civilization," which featured Bonebrake, guitarist Billy Zoom, bassist John Doe and lead singer Excene Cervenka as well as the likes of Black Flag, and Fear. It’s even further in some ways from playing in the Masque, Brendan Mullen’s seminal back alley club off Sunset, with the wild Go-Gos, the manic Germs, and the Dickies.

Then again, X’s meld of Bukowski, Faulkner, and Chandler poetics with a uniquely high voltage meld of blues and rockabilly always stamped them as something other than many of their peers or potential protégés. “I've had people tell me they are influenced by our band,” notes the X drummer, “but they never sound like us.”  That sound, however, as "Wild Gift," the band’s 1981 album that Rolling Stone then called the “Record of the Year”, and 1982’s "Under the Big Black Sun" has stood the test of time to sound eminently ahead of today’s contemporaries like Green Day and found several generations of new devotees.

“Are we mainstream? I don't know,” responds Bonebrake.  “I think that after 30 some years people are more open to our music.”

Part of that openness has to also come from accessibility. After various personal changes and some extended hiatus in the 1980s, the original line-up reunited in the late 1990s and has been touring fairly regularly. I can tell ya, having first seen X live in 1983, the Portland stop on the band’s 2008 “13-31” anniversary tour and at this year’s Coachella Festival were two of the best shows I’ve ever seen them play over the decades — and I’ve seen them a lot.

Not that X, like so many of their contemporaries and the dinosaur bands that preceded them, are simply exercising old muscles. Today John Doe is a Hollywood staple and roots music journeyman, with appearances on series like "One Tree Hill," "Law and Order" as well as his recently released stripped down "Country Club" with The Sadies.

His X writing partner and ex-wife Cervenka, who made public this summer that she is suffering from MS, has become a whirlish publishing cottage industry of her own. The singer has brought out several books of poetry and prose and frequently does spoken word appearances alone or with former Black Flag frontman Henry Rollins and others. Cervenka, who is better known in certain tabloid circles as the former wife of actor Viggo Mortensen, also brought out "Somewhere Gone," a new solo album this fall.

While the band has a few new tricks up its sleeves, fans can expect X, who looks set to hit Europe and Australia in 2010, to deliver the anticipated presents they want tonight at the Wiltern. “Expect us to play our "hits,” DJ Bonebrake laughs, “and a couple of Xmas songs for good measure.”

Of course, expectations aside, why did the little punk band from L.A., as X used to be introduced as, get into the Christmas

“I think it started with our name,” admits Bonebrake. “It looks really cool on the marquee on Christmas — Celebrate Xmas with X."

Yes it does indeed.