Halloween is the scariest holiday for a celeb-spotter, rewarding only eagle-eyed party-goers who can recognize famous faces hiding beneath professional makeup, a wig or a mask.

For the season when everyone in the industry moonlights as a costume designer, hair or makeup artist, from Hollywood (George Clooney, Heidi Klum and Maxim) to non-Hollywood (world class DJ’s in San Bernadino) — here’s a treat: The Party Report’s guide to Hollywood’s Halloween celebrations for 2016. 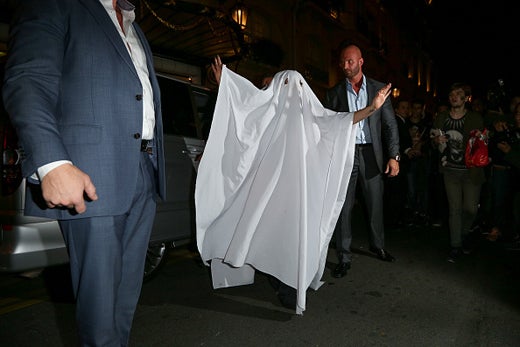 Lady Gaga dressed as a ghost in 2014. (Marc Piasecki/GC Images)

*Top Invite*
Heidi Klum’s 17th Annual Halloween Party
Vandal (New York City)
Halloween Night, Oct. 31
On the morning of Nov. 1, when you pop open Facebook to feast on your friends’ and family’s costume revelry from the night before, “Heidi Klum” will likely be floating at the top right of Facebook’s trending stories.

As the queen of Halloween, the Emmy-winning “Project Runway” host’s show-stopping costumes have bloomed over the years, from a convincing Jessica Rabbit, to a faithful personification of an elderly woman, and even a graphic inside-out human. 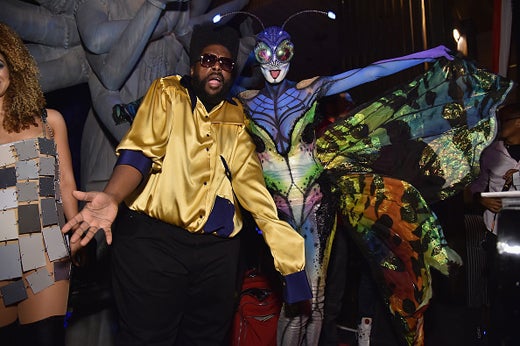 Questlove will spin the beats at Noah Tepperberg and Jason Strauss’ Vandal, a restaurant and lounge hotspot in Manhattan’s Bowery, as Svedka supplies the cocktails.

New Yorkers, keep your eyes peeled. The Emmy-winning “Project Runway” judge has been known to make street-style fashion shoot stops around Manhattan before arriving at her bash (see top photo, in Times Square). 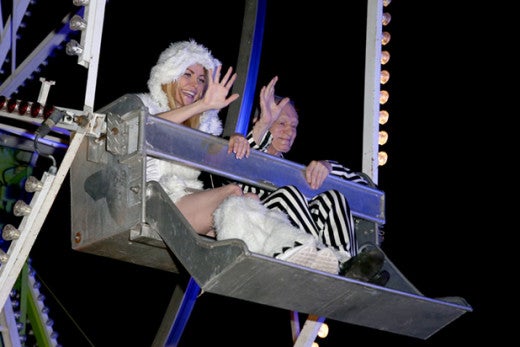 This is the choice L.A. invite to say the least. 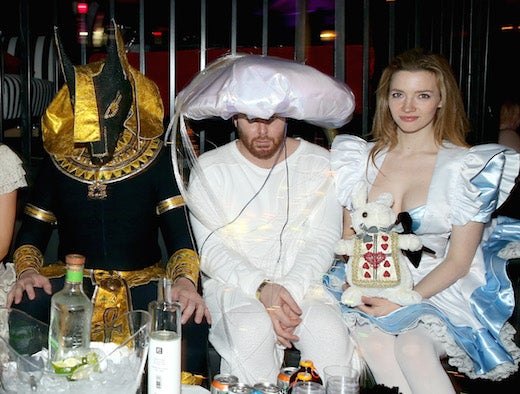 Soho House West Hollywood
Saturday, Oct. 29
Soho House is dressing up in fetish art, teaming with West Hollywood’s Taschen Gallery to “explore the dirty minds” of noted foot fetish photographer Elmer Batters and bondage illustrator Eric Stanton. The Halloween party is a top night of the year at “the House,” with Bacardi cocktails partnering on the pours. Double check your footwear.

Soho House Little Beach House Malibu
Saturday, Oct. 29
As the big brother house in the city bathes in risqué art from the ’60s and ’70s, the intimate beachside outpost rolls it a decade forward to the ’80s — literally.

There will be a midnight roller derby to complement hot pants, sequins and roller skates on tap for the “Xanadu”-themed party. As always, the Soho Houses are restricted to their members, so gaining admission requires a touch of Olivia Newton-John‘s “Xanadu” anthem: “You have to believe we are magic.” 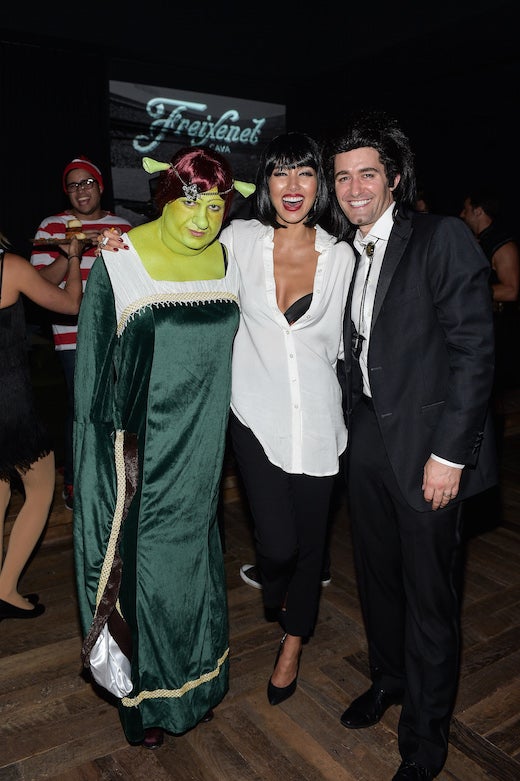 Matthew Morrison‘s Halloween and Birthday Party Presented by Freixenet Cava
Hyde Sunset
Saturday, Oct. 29
The “Glee” alum’s annual bash took off during the peak years of the Fox series, becoming a must-hit for young Hollywood and the crowd that orbits them. This Saturday night bash is on the of Morrison’s 38th birthday. Expect names like Derek Hough, Lucy Hale and Chord Overstreet.

Ticketed Events Open to the Public

Gay Men’s Chorus of Los Angeles’ “Fred & Jason’s Halloweenie”
California Science Center
Friday, Oct. 28
There will be dancing under the space shuttle Endeavor, though organizers reserve the right to limit and edit costumes with props that could damage the retired rocket. Lance Bass, Frankie Grande, Alexandra Grey (“Transparent”), and Jonny Drubel of “Rich Kids of Beverly Hills” are expected.

Tickets are available to the public.

In recent months, they have partnered with the NFL and drawn headlines from GQ to BuzzFeed. They now seek out an equally eccentric time slot: Sunday night. The “Mischief Mystery” party begins with a yoga warmup (6-7 p.m.) leading in to the dance party (7-9 p.m.) Non-rave costumes are welcome. Get tickets here.

Mondrian and Skybar Halloween: The Labyrinth Ball
Saturday, Oct. 29 and Sunday, Oct. 30
Mondrian Hotel, West Hollywood
“Come muppets and goblins, gents and dames, a dance floor of magic awaits,” the invite from the perennial Halloween hotspot beckons. A limited number of free tickets (entry before 9:30 p.m.) are available now, and then tickets increase to $25 for GA and $75 VIP that includes two hours of a hosted champagne bar. David Bowie tribute band “The Band That Fell To Earth” performs on the 30th.

The Maxim Halloween Party
Downtown Los Angeles
Saturday, Oct. 22
Last year’s Maxim party had all the glam, drama and outrageously sexy costumes that guests have come to expect from the men’s magazine’s events. The party is not for the faint-hearted in any way — expect to have the life scared out of you in the theme park-worthy Haunted House or by ghosts and ghouls jumping out of graveyards. Created by Hollywood set and production designers, Maxim transforms a multi-million dollar mansion into a total scarefest — packed with celebrities, entertainment stars and beautiful people. Guests and performers at the 2015 bash included Nick Jonas (below dressed as the Hamburglar), Niecy Nash, “DWTS” pros Val and Maksim Chmerkovskiy, and singer/fashion designer Aubrey O’Day. 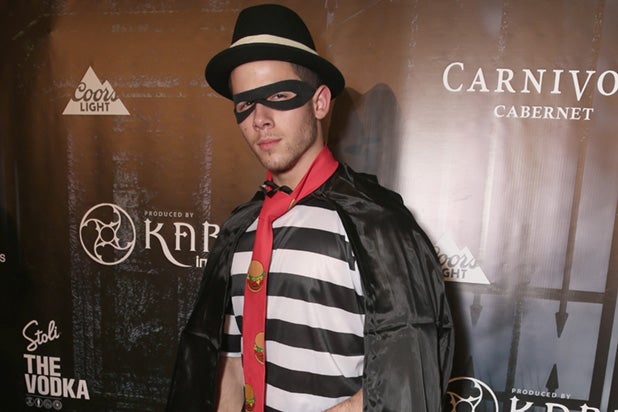 This year’s Maxim party on Saturday night is once produced by Karma International and presented by Pure Model Club, with specialty sips by CÎROC Ultra Premium Vodka, Tequila Don Julio Blanco and Don Julio 1942. While no names have been leaked yet, the organizers are teasing two surprising performances, along with sets by DJ Vice, DJ Steve Castro, DJ Lee Kalt, and DJ KJ. 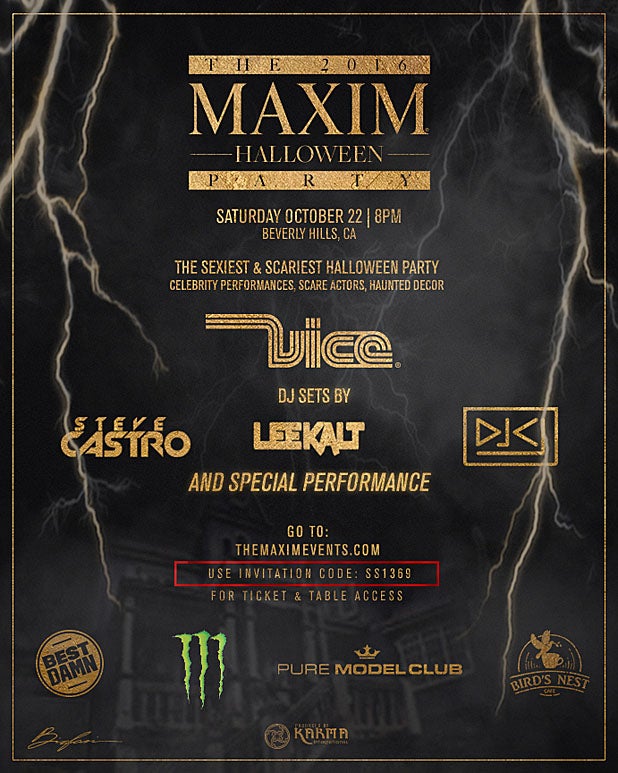 Not in Hollywood and not a heavy “Hollywood” crowd, but by far the most spectacular production value of any Halloween celebration in SoCal.

All parties are private and by invitation only unless otherwise specified.

From Nick Jonas performing at the Maxim party to Lena Dunham and Colton Haynes, TheWrap rounds up the best celebrity Halloween looks

Nick Jonas, who attended and performed at Maxim's Halloween party, dressed as the Hamburglar. Karma International produced the flamboyant bash with sponsors including Stoli Vodka, Carnivore Cabernet and Coors Light