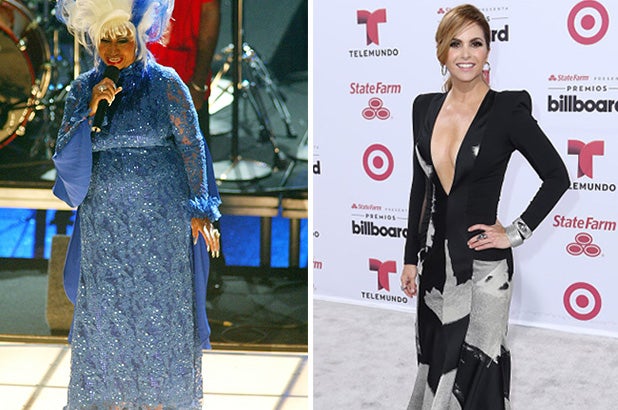 Telemundo said Tuesday that it’s spicing up its 2015-2016 lineup with a series starring a Mexican superstar and a musical drama revolving around the Queen of Salsa.

Among the company’s new and returning programming announced May 12 in New York as part of the upfronts is the scripted drama series “Celia” based on the life of late Cuban-American music legend Celia Cruz. The Spanish language broadcaster is also rolling out the telenovela “La Indomable” (The Indomitable), featuring superstar Mexican singer, songwriter and actress Lucero.

Telemundo says its weekday primetime ratings are up 20 percent year-to-date among adults 18-49, thanks to reality shows, live events and scripted drama series designed to return for multiple seasons.

“The new strategy has brought consistency to Telemundo’s schedule and performance. We are entering the Upfront season with record volume and share, great momentum and a slew of new programming ideas,” said Luis Silberwasser, Telemundo president. “We are hyper-focused on creating content for Hispanics who live in the U.S. and audiences are responding.”

Below is an overview of Telemundo’s new and returning programs:

SUPER SERIES:
“La Querida del Centauro” (Centaur’s Woman) is a drama and action-packed series that tells the story of Yolanda, a woman who will be capable of breaking the law out of love for her daughter. Even risking her own life, she serves as bait to capture one of the most dangerous drug traffickers in Mexico.

“El Señor de Los Cielos” (The Lord of the Skies) Season Four – TELEMUNDO’s record breaking 10pm Super Series, will be back for a fourth season.  Aurelio Casillas, the once humble man who managed to become one of the wealthiest and most powerful drug lords in Mexico, will realize that the limit to his aspirations will not be set by the law, but by himself, as he will face a cruel new reality in a limitless struggle to survive.

“Señora Acero” (Mrs. Steel) Season Two – starring Blanca Soto, will return for a second season. Having been the woman capable of shaking up the Mexican government, Sara’s new challenge will be to rebuild an even more powerful empire, to confront her cold-blooded enemies and protect the lives of her loved ones.

SCRIPTED DRAMAS:
“Bajo El Mismo Cielo,” (Under the Same Sky) inspired by Roger L. Simon’s original screenplay, “A Better Life,” narrates the moving story about a father who, in search of a better future for his children, bears the difficulties suffered by many immigrants in search of the American Dream. Amidst his struggle for survival, he will encounter love in the most unexpected of ways.

“Celia” is the story of the internationally renowned Cuban musical artist, Celia Cruz. Born in the midst of the Cuban Revolution, Celia was a woman with an extraordinary talent. Her inimitable voice transformed her from a humble, shy, ordinary, young woman into a superstar with the world at her feet. Celia turned salsa into the most popular Latin music genre in the world and became a woman, who despite being far from her home land, was able to honor it and demonstrate that there are no impossible dreams.

“Quién es Quién” (Twisted Love) is a humorous, romantic story where destiny leads twin brothers, separated at birth, to embark upon separate paths only to reunite them years later. But a twist of fate will have the brothers exchange their identities, leaving them to face challenging, yet oftentimes comical situations.

“La Indomable,” (The Indomitable) features mega-star Lucero, in her highly-anticipated return to telenovelas, as a woman rebuilding her family and her life after finding love again.  Although she is capable of standing up to any challenge, she will struggle to overcome the injustices of which she will be a victim. However, the toughest battle will be against herself, when she is forced to face her own prejudices.

“Doña Bárbara,” based on the classic, best-selling novel, tells the story of a legendary woman, known by some as a “femme fatale;” who draws all the looks, not only for her beauty, but also for her strong will. TELEMUNDO brings back Aracely Arambula in a new adaptation of the popular telenovela that has immortalized the great divas of Latin America.

MINISERIES:
“Hasta Que Te Conocí” (Until I Met You) is a biographical drama series based on the life of Mexican music icon Juan Gabriel. The series will tell the real-life story of one of Latin America’s most successful singer-songwriters.  Viewers will get a rare look into the man behind the music and discover the human aspect of the star that has conquered the hearts of audiences throughout the world.

“D.C: La Biblia Continua,” (A.D. The Bible Continues) from producers Mark Burnett and Roma Downey, picks up where the smash hit miniseries “La Biblia” (The Bible) left off, continuing the greatest story ever told and exploring the inspiring events that followed the Crucifixion of Christ.

“Francisco El Jesuita,” (Francis, The Jesuit) based on the best seller, “El Jesuita,” the only official and authorized biography of the Pope, this miniseries, chronicles the life and work of Pope Francis, Jorge Mario Bergoglio.

SPECIALS:
“Latin AMAs,” (Latin American Music Awards) the first-ever Spanish-language music awards show modeled on the AMA’s, will pay tribute to today’s most influential and iconic Latin artists.  The Latin AMAs will honor artists in the genres of Pop/Rock, Regional Mexican, Urban, Tropical, Adult Contemporary, Contemporary Inspirational, as well as categories for Crossover Artist, Favorite remix, Top Soundtrack, New Artist of the Year, Artist of the Year and Single of the Year.

“The 2015 iHeartRadio Fiesta Latina” is a music festival sponsored by iHeartRadio. The festival is a spin-off of the highly successful iHeartRadio Music Festival and will feature some of Latin Music’s top, best-selling artists, along with and new, up-and-comers.

Returning next year are the prestigious “Billboard Latin Music Awards,” honoring the most popular albums, songs, and performers in Latin music on the Billboard charts, and “Premios Tu Mundo,” Telemundo’s popular original awards show, where fans vote for their favorites in television and music.

WEEKEND PRIME:
“Gran Hermano” (Big Brother), TELEMUNDO’s newest Sunday reality show, is the first-ever Spanish-language version for the U.S. Hispanic audience of Big Brother, a truly global format, produced by Endemol Shine Latino, the Spanish language division of Endemol Shine North America. One of the longest-running reality shows in the world, broadcast in over 110 countries over a span of more than a decade, this reality phenomenon will now be produced for the first time in U.S. Hispanic television. The show will follow a group of strangers living together in a house outfitted with dozens of cameras and microphones recording their every move 24 hours a day, seven days a week, offering viewers unparalleled coverage on-air, online and through mobile platforms.

“La Sorpresa De Tu Vida” (The Surprise of Your Life) is a two hour weekly, family-oriented show hosted by beloved Mexican actress/singer/host Angelica Vale and Raul Gonzalez, one of Spanish-language television’s best-known personalities.  Through the use of testimonials, real life inspirational stories, games, studio audience participation, sponsors, celebrity collaborations and participations, the show will surprise and fulfill the dreams of members of the audience. The show provides a space where viewers are invited to share and take part in creating something special. They become instrumental in the process of watching their loved one’s dreams and surprises come true.

“La Voz Kids” Season 4 – the Sunday night hit singing competition, will return for a fourth season, along with superstar coaches Daddy Yankee, Natalia Jimenez and Pedro Fernandez. Produced out of Universal Orlando Resort, young vocalists between the ages of seven and 15 will show off their singing abilities and give it their all on stage, as they compete for a recording contract and cash prize to support their education.