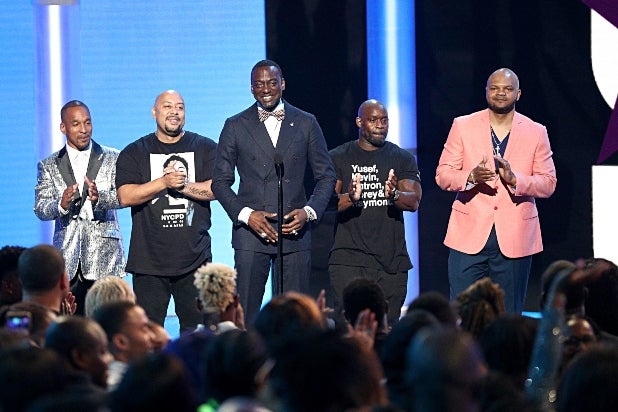 Antron McCray, Kevin Richardson, Yusef Salaam, Raymond Santana and Korey Wise received a standing ovation at the BET Awards Sunday night, where they were introduced not by their old tabloid nickname, “The Central Park 5,” but as the “Exonerated 5.”

Host Regina Hall introduced the men, who were convicted and then exonerated in the 1989 sexual assault of jogger in Central Park. Their story is the subject of Ava DuVernay’s new Netflix miniseries, “When They See Us.” You can watch the full clip below.

“Our next presenters were five teenage boys who were falsely accused and wrongly convicted of an unspeakable crime. ‘When They See Us’ is a poignant, true story that reminds us all of the racial injustices that continue to happen [to] us all and plague our justice system. It is my sincere honor to introduce to you Yusef Salam, Korey Wise, Kevin, Raymond Santana, and Antron McCray — now known as the Exonerated 5.”

The five men introduced the artist H.E.R., who was nominated for three BET Awards including Best Female Pop Artist, Best Collaboration, and the BET HER Award. The crowd cheered as they took the stage, and each man took a moment to share some words of wisdom.

“We are all on our own individual journey in life,” Wise said.

“We don’t know where our journeys will take us, or how they will collide with others,” said McCray.

“We didn’t know that one day would bond [us] to these men for the rest of our lives,” said Richardson.

“But we know in telling our truth, our lives have been changed forever,” said Salaam.

“Your truth is the foundation your legacy will be built upon.

Your truth will be the memories people keep long after you’re gone,” said Santana.

As seen in “When They See Us,” the men were exonerated when DNA evidence proved another man committed the crime — and he confessed.

While on stage, Yusef took the opportunity to salute his wife, who was cheering him on from the audience.

“Check it though. This next performer, like us, is serious about telling her truth. She has the soul of someone who has been here before. And her voice, like ours, has the power to change a generation,” he said.

But Santana had the last word. “Man, I wish you were around when we were coming up,” he said. “Here to preach her own gospel and share her own truth, joined by YBN Cordae, please welcome — H.E.R.”