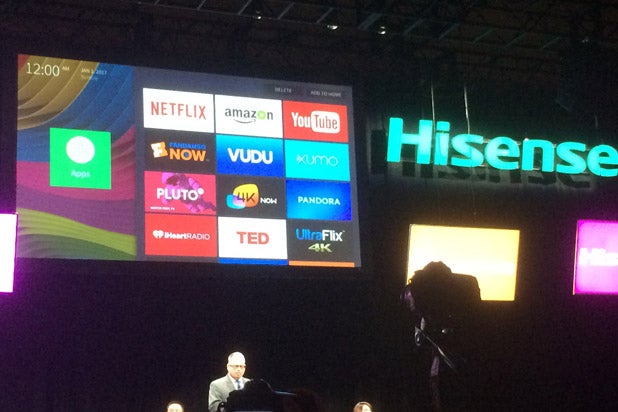 With Netflix, Amazon and the proliferation of cheap video cameras and reliable home internet around the world, a deluge of original content is constantly being created. And to make customers — particularly younger ones — happy, TV manufacturers have decided to let it all flow in.

That’s good for consumers but potentially not great news for content producers who may have been there first and are now under threat of getting drowned in today’s free-for-all.

On Wednesday, several of the world’s largest electronics manufacturers rolled out their latest smart TVs for a horde of jorunalists and analysts at the Consumer Electronics Show in Las Vegas. What was clear from those presentations (other than the fact that consumers apparently really want sets that are approximately the size of a French door) is that the line between traditional pay-TV and streaming is not just blurred, it basically doesn’t exist anymore. That’s all designed to let viewers watch what they want, how they want, when they want it — without much deference to what content creators and distributors would prefer them to see.

That all has consequences for the traditional TV industry, whose real estate (how good was it to be Channel 2 on a set that just had up-down buttons or a simple remote?) is being devalued instantly. And having prime broadcast spectrum may not matter as much when anyone can broadcast to any big screen with really just a cell phone and YouTube channel.

Television manufacturers anxious to win over younger customers (who watch streaming video and internet TV at a much higher ratio) have responded by putting smart interfaces in their hard products, allowing them to watch video from a wide variety of sources without discriminating based on incumbency or any institutional advantage.

Westinghouse and Element Electronics unveiled new product lines with Amazon’s Fire TV platform built in. Chinese brands TCL and Hisense chose Roku Inc.’s Roku interface as their preferred dashboard. And Samsung, which was responsible for more than half of all Ultra HD TVs sold in the U.S., has chosen the open-source Tizen interface as the backbone of its Smart TVs — which is all the company is releasing in the U.S. this year.

Hisense’s new TVs even come with an integrated web browser, which allows viewers to watch pretty much whatever video they manage to find in the far reaches of the internet — for better or worse.

Lee went on to say that “personalized discovery” — the exact opposite of Channel 2 being valuable because it was effectively everyone’s home screen — is one of the pillars of Samsung’s smart TVs.

“Our smart hub lets you browse across live TV and your favorite streaming services all on one screen,” he said during the Korean electronics giant’s presentation. “Our personalized recommendations discover entertainment for you when you want to be inspired.”

Samsung’s new TVs could also threaten one of pay-TV’s remaining real moats: live sports rights. ESPN is easily the priciest cable channel, and many regional sports networks are not far behind. They have that pricing power — even if they’re losing subscribers in this age of cord cutting and trimming — because it’s acceptable to catch up on a Netflix show or HBO series on one’s own terms, but nobody wants to miss their team play in a big game.

But Samsung’s new smart TVs have a special feature that doesn’t distinguish between all available outlets where a game might be aired — whether that’s cable, streaming or broadcast — and might even enlighten sports fans who are reliable cable consumers primarily for that reason that they could watch games elsewhere.

Also Read: Netflix in January: What's Coming and What to Watch Before It's Gone (Photos)

“With our new sports service, you can find your team — on live TV or streaming — all on the same page,” Lee said.