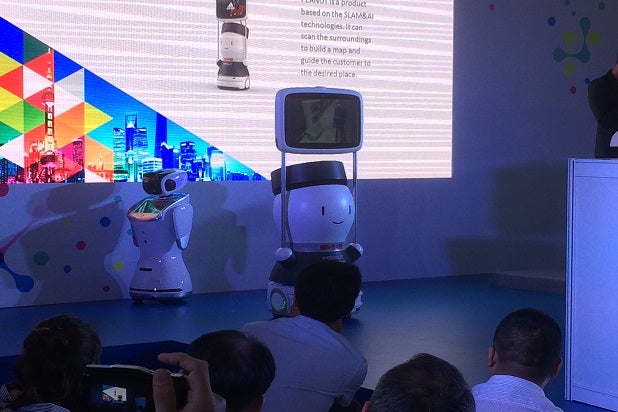 CES Asia, the Shanghai version of the Consumer Electronics Show — and one of the rare Chinese productions smaller than its 50-year-old Las Vegas counterpart — aims to provide a look at how we will live, work and entertain ourselves in the not-so-distant future.

We already know there will self-driving cars, voice-controlled everything and internet-connected showers and refrigerators. But if the show floor Wednesday at the airport-scale Shanghai New International Expo Center is any indication, there also wil be a lot of robots.

While Chinese companies apparently have a lot less compunction than their American counterparts about using underdressed young women to draw attention to their booths, CES Asia featured a runway show that didn’t include a single human model. Instead, a parade of robots who do everything from mapping surroundings to serving food rolled down the catwalk, with a group of six mini-bots stopping for a perfectly choreographed “Gangnam Style” routine.

That’s not to say most of the robots were frivolous — plenty were built to handle necessary if tedious human tasks, like serving food, collecting garbage and even catching fish. The parade included two robots designed to take the aimless waiting out of fishing, the Fifish P-4 and PowerRay underwater drones, which map the surroundings, locate fish — and in the case of the PowerRay — even allows the user to drop bait remotely.

Teaching a man to fish may become as obsolete as teaching one how to fix a typewriter, but that doesn’t mean people at CES Asia weren’t asking WWJD? In that case, they were referring to JD.com, the Chinese tech giant with an adorable Internet 1.0 name whose booth occupied the center of one of the halls. JD highlighted an unmanned aircraft, the JDrone, the size of a small helicopter.

Of course, it wouldn’t be CES without walls of TVs, as a handful of Chinese brands most Americans have never heard of rolled out bigger and thinner LED screens and got people to congregate at their booths using the time-tested tactic of showing them shiny things.

While giant flat screens from prestige brands like Sony, LG and Samsung occupy plenty of vertical real estate in studio conference rooms and West L.A. mansions, the average consumer is more likely to watch “Real Housewives” and “Big Little Lies” on models from Chinese companies like Hisense and TCL, whose combination of increased reliability and competitive prices have made them some of the country’s best-selling models.

Many of those Chinese brands showed off their more aspirational models at the show, with Hisense making its 100-inch 4K LaserCast short-projector TV a centerpiece of its display, just as it was in Las Vegas earlier this year. Going to the movie theater remains the best way to experience high-quality video content, but that gap between the multiplex and family room continues to close in a way in-theater recliners alone can’t make up for.

Virtual reality was one of the stars of Sin City’s CES and it was no different in China. Seemingly every significant computer company had some sort of VR headset on display, and one of the crowd favorites was the Neo DKS from Chinese manufacturer Pico.

Also Read: CES 2017: Hollywood Loves VR More Than Ever, But Watch Out for Augmented Reality

The device, powered by Qualcomm’s Snapdragon processor, took often-clunky mobile VR to a level of smoothness TheWrap had not yet experienced, as your correspondent strapped on the white headset and grabbed the Super Nintendo-style controller and was instantly transported into space, shooting down enemy craft by locking onto them with his eyes and hitting the B button as the trigger. The Neo DKS doesn’t have the computing power of tethered, PC-based systems like the Oculus Rift and HTC Vive, but it was easily the best wireless VR rig TheWrap has ever played with.

TheWrap also demoed a set of augmented reality goggles from Shadow Creator that looked to be inspired by Microsoft’s HoloLens, but with a slimmer and more comfortable form factor. The equipment displayed a series of windows in a row across the landscape, allowing a user to set an appointment on a calendar and read through emails without taking his or her eyes off a beautiful sunset — or cavernous exhibition hall, in this case.

HiScene also had a station set up for its HiAR augmented reality headset, which had plenty of buzz in the room, but with only one rig set up and a demo that took a good five-plus minutes per person, TheWrap wasn’t able to squeeze it in Wednesday.

In Wednesday’s opening keynote, CES organizer Consumer Technology Association President and CEO Gary Shapiro kicked off the event with a few words in Mandarin — complete with a convincing accent that seemed to delight most attendees — before presenting CES Asia as an exclusive destination for high-caliber, vetted technology companies.

“We only accept major brands or truly innovative companies,” Shapiro said. “In fact, we turned away more than 200 applicant companies this year.”

Shapiro also didn’t shy away from bringing up the leader of the free world and social-media master Donald Trump, linking him to new French President Emmanuel Macron by talking about the rise of “nontraditional candidates” — which raised some eyebrows in the media section – but providing a segue to France, which has a significant presence at this year’s show, including the mayor of the city of Angers.

But most importantly — and contra Trumponomics — Shapiro gave an unfettered defense of free trade, highlighting the main reason an estimated 30,000 people converged on Shanghai this week.

And based on what TheWrap saw today, our robot overlords look like they’re coming soon to claim some of that market. But at least they’ll bring snacks and keep the house clean.