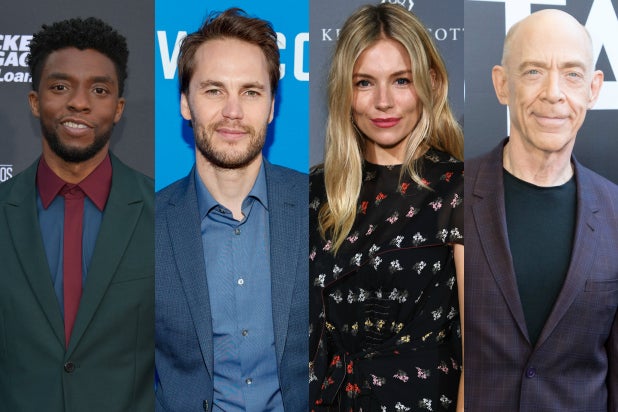 “17 Bridges” stars Boseman as a disgraced NYPD detective who is thrust into a citywide manhunt for a pair of cop killers after uncovering a massive and unexpected conspiracy.

As the night unfolds, lines become blurred on who he is pursuing, and who is in pursuit of him. When the search intensifies, extreme measures are taken to prevent the killers from escaping Manhattan as the authorities close all 17 bridges to prevent any entry or exit from the island.

The studio, a division of STX Entertainment, did not specify what roles Simmons, Miller or Kitsch will play.

Brian Kirk (“Luther”) is directing “17 Bridges” from a screenplay written by Adam Mervis, though Matt Carnahan was brought in to make revisions to the script.

MWM Studios is the film and TV division of MWM (Madison Wells Media) behind critically acclaimed projects such as the National Geographic series “Genius” and “Hell or High Water.”

Mike Larocca (“Rise of the Planet of the Apes”) will executive produce the film under the AGBO banner.

STXFilms is making it a point to get into the big-screen action film game. In addition to “17 Bridges,” the studio has what it hopes will be a new franchise in “Muscle,” for Vin Diesel, and Dave Bautista action-comedy called “My Spy,” which will also be produced by MWM Studios.

STXfilms’ senior vice president of production Drew Simon and director of development Kate Vorhoff will oversee the production of “17 Bridges” on behalf of the studio.

Miller is repped by WME and United Agents in the U.K. and will next star in the indie thriller “American Woman.”

Kitsch was most recently in the six-part event series “Waco” and is repped by CAA and Untitled Entertainment.