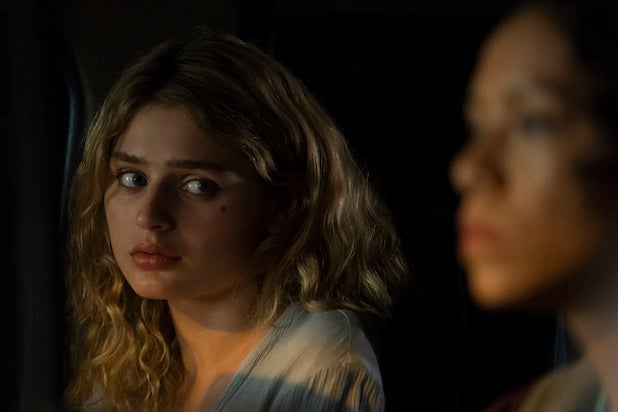 (Warning: This post contains spoilers through the Season 1 finale of “Chambers”)

Netflix’s new horror series “Chambers” may have scared the [redacted] out of you upon your first viewing, but we at TheWrap — who definitely had the [redacted] scared out of us, too — can tell you it’s a show that is going to require multiple viewings to catch everything embedded in the twisted heart of the thriller.

That’s because we talked to “Chambers” creator Leah Rachel, who told us what she packed into the streaming service’s 10-episode drama that definitely went over our heads.

The plot centers around Nancy (Uma Thurman) and Ben Lefevre (Tony Goldwyn), a grieving couple whose daughter’s heart is donated to save another girl’s life. When the Lefevres offer the survivor, Sasha Yazzie (Sivan Alyra Rose), a memorial scholarship in their daughter Becky’s (Lilliya Scarlett Reid) name, their intentions seem good — but soon Sasha is warned: “Watch out for that family.” And the closer Sasha gets to uncovering the truth about her donor’s sudden death, the more she starts taking on some very disturbing characteristics of the deceased.

Also Read: 'Chambers': Tony Goldwyn on Ben's 'Tragic Mistake' and What His Fate Means for a Season 2

All of that is clear if you watch the show, but here’s what we managed to get out of Rachel regarding what you probably did not find so obvious — though she wants to leave plenty of hidden bits for fans to discover themselves.

The importance of fish.
“The Lefevres are pescatarians, they don’t eat meat. And the Yazzie’s own a fish shop. And if you look in the Lefevres’ house, there is a lot of the stuff on the walls that has to do with fish. Nancy biting the head off a Swedish Fish in Episode 2. And there is sort of a strange symbolism in that that they don’t consider fish animals. I’ll leave that up to what people think on that.”

The even more important role of the mice.
“Another one is the mice, if you look deeply into the mythology of Lilith, you might find something there.”

How Teddy the homeless woman helped Sasha discover that Becky was infested with Lilith’s spirit — and ultimately Sasha being taken over by the spirit as well.
“Oh my God, yes, Teddy! Yes, when you are watching it, her role in it, she’s leading [Sasha] to it and giving Yvonne the tourmaline. And because, like Becky said, she’s the only thing holding the bad back, she’s like a stopper in a plug. And so there is a little bit of aiding going on with Teddy who plays the homeless woman. She’s giving them clues on purpose. And she was involved deeply within the mythology of it.”

How the series’ title gets name-dropped in subtle ways, like when Sasha and Becky are trapped inside a version of Sasha’s house inside their entwined souls. (It makes sense if you’ve seen the show.)
“Obviously the four chambers of your heart are part of the title. But in the finale when they are stuck inside Sasha’s house that has been infested by Becky, there’s all these doors and closed doors and locked doors and one door leads to another and you can be trapped inside of it and can’t get out. And I had this really messed up dream once that I was inside my own heart, this was really creepy and that’s why Episode 10 was like that. It was almost like ‘Suspiria,’ with endless halls with doors. And each one held a different memory: you’ve got your childhood in here, and your dreams in here, and your pain in here, and it’s all these closed doors that could be opened too and unlocked. But to me, the thought of a house or corridor with lots of doors and some are locked, some are unlocked, the thought of rooms in a heart has always been really poignant for me.”

For more from our interview with Rachel, in which she breaks down that twist ending and what a possible Season 2 would look like, head over here.