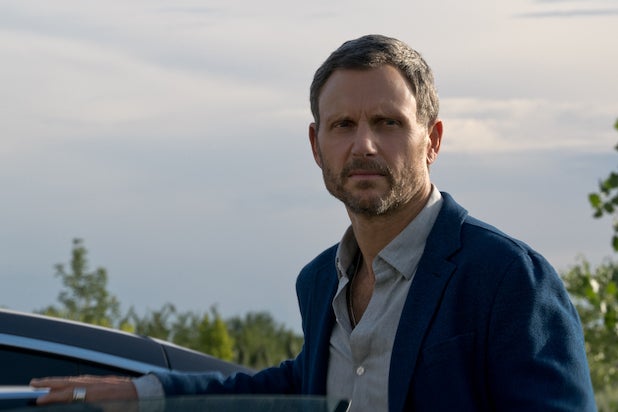 (Warning: This post contains mild spoilers through Episode 109 of “Chambers.”)

Netflix’s new horror series “Chambers” starts as a psychological thriller based on real-life fears and takes a sharp turn that leads its characters into the dark world of the supernatural. It also leads viewers down a path of confusion as they try to separate what’s fact and what’s fiction.

Tony Goldwyn, who stars on the Leah Rachel-created drama as Ben Lefevre, is particularly proud of how that dichotomy comes to a head in the episode he sat behind the camera for.

“The one I directed, which is the second-to-last one, No. 9 — that’s when things get really weird,” Goldwyn told TheWrap. “And there’s basically, most of that episode is Uma [Thurman] and Sivan [Alyra Rose] in a box, in one space. And so Leah had the idea of using the reflections, these images from Becky’s childhood, slide projections that Nancy plays for Sasha to provoke her daughter.”

“That gave us a tremendous visual opportunity, ’cause we had this glass booth, to use projections and this imagery to create a completely surreal environment that was totally real and practical,” he continued. “There was nothing tricky about it, it was just real. But it’s very weird and otherworldly as it’s happening. So honestly the only CG elements in that is a trick with Sasha’s eyes.”

“Chambers” centers around Nancy (Thurman) and Ben Lefevre (Goldwyn), a grieving couple whose daughter’s heart is donated to save another girl’s life. When the two offer the survivor, Sasha (Rose), a memorial scholarship in their daughter Becky’s (Lilliya Scarlett Reid) name, their intentions seem good — but soon Sasha is warned: “Watch out for that family.” And the closer Sasha gets to uncovering the truth about her donor’s sudden death, the more she starts taking on some very disturbing characteristics of the deceased.

“One of the things that most appealed to me about Leah’s creation of this was that everything that happens supernaturally is grounded in reality,” Goldwyn told us. “So you don’t know if what you’re seeing — until very late in the show — has a supernatural element, or if Sasha is just losing her mind. You don’t know if Ben is driven by something nefarious, if there is something wrong — or if he’s just a desperate, grieving father, who can’t purge himself of the loss of his daughter.”

Also Read: Tony Goldwyn Tells Us Where He Thinks Fitz and Olivia Are a Year After 'Scandal' Series Finale

“And similarly with Uma’s character, Nancy, you don’t know if there is something off with her or is she also just trying to cope desperately with her grief,” he continued. “And then as the series goes on it gets weirder and weirder, but it’s always grounded in this human reality. And I think that’s what makes it compelling. And frankly, for me, in the horror genre my favorite films are the ones where the scares are really driven by genuine human reality and genuine human relationships and emotion.”

The “Scandal” alum told us it was important to Alfonso Gomez-Rejon, who directed the majority of the show’s 10 episodes, and Rachel that “Chambers” remained “very reality-based.”

“There was very little that we did that used CGI, you know, everything was pretty much practical in our approach,” he said. “So that’s one thing I think they really wanted to do, and that Alfonso wanted to do from the beginning, was have everything be very reality-based, very naturalistic, very little makeup, very raw and exposed and human. And I think that’s kind of what makes it special.”

You can check out our interview with Rachel about the “really f–ked up” series here.