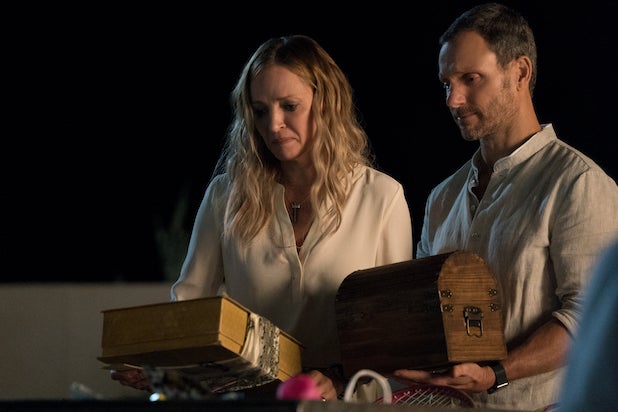 Leah Rachel will be the first to tell you her new Netflix series “Chambers” is “really weird.” She’ll probably also be the first to tell you it’s “really f–ked up.” And those self-aware descriptors are why she’s also the best person to explain how she landed two A-list actors to lead the cast of the streaming service’s upcoming twisted thriller: Uma Thurman and Tony Goldwyn.

“For somebody of Uma’s caliber, when we were casting Nancy, our casting director gave me the list of actresses that she had in mind for her and she had Uma Thurman’s name on it, and I think I laughed when I read it,” Rachel told TheWrap. “I was like, ‘OK, yeah sure, we’ll see.’ And then she really responded to the script!”

Thurman stars on “Chambers” as Nancy Lefevre, a grieving mother whose daughter’s heart is donated to save another girl’s life. When Nancy and her husband Ben (Goldwyn) offer the survivor, Sasha (Sivan Alyra Rose), a memorial scholarship in their daughter Becky’s (Lilliya Scarlett Reid) name, their intentions seem good — but soon Sasha is warned: “Watch out for that family.” And the closer Sasha gets to uncovering the truth about her donor’s sudden death, the more she starts taking on some very disturbing characteristics of the deceased.

“Alfonso Gomez-Rejon, the director, and I flew out to New York and I sat with [Uma] and I talked to her … because especially in the first episode and then as you see throughout the season, the show goes a lot of different places,” Rachel said, adding, “you go through tons of different stages.”

“And when we met with her and really talked with her about why I’m telling this story, what we’re searching for, you know. That the show is really f–ked up and really a messed up meditation on trauma and how people get through it and the things people make up to get through it or project onto different people to get through it,” she continued. “And Uma has a daughter that’s six years older than the character of Sasha, so I think it was something she could really tap into. She was also a producer on the project, and she and Tony really mentored the younger cast too, and showed them what it was to be a professional, which was really really awesome.”

Rachel said another thing that Thurman loved about the project was the “feminine energy” and “sultriness” built into both the characters of Sasha and Nancy. “So just looking at this show, this genre, this storytelling through the eyes of women, I think really excited her,” she said.

When it comes to why Goldwyn signed on, he told us it didn’t hurt that “Chambers” is “very different” from “Scandal,” the Shonda Rhimes-created political drama he starred on for its full seven-season run, which wrapped last April.

Also Read: Tony Goldwyn Tells Us Where He Thinks Fitz and Olivia Are a Year After 'Scandal' Series Finale

“Mainly I thought Leah’s writing was very smart and original and taking a piece that has aspects of being a genre piece, but giving it so many more dimensions in terms of it being a family drama, and a high school drama, and a supernatural thriller,” Goldwyn told TheWrap. “And it has all of these qualities to it that I thought were really interesting. So that was the first thing that grabbed me. And I love Uma and was excited to work with her. I also think Alfonso Gomez-Rejon is a fantastic filmmaker and loved his work on ‘Me and Earl and the Dying Girl.’ And all the people involved just made it an amazing opportunity.”

As for the young stars who play Becky, Sasha and the other teens in the haunting tale, if you don’t recognize their faces, that’s kind of the point.

“It’s what I was going after was to have the teen cast be relative unknowns,” Rachel said. “And in Sivan’s case, she had just moved to Los Angeles seven months before — she’s actually from Arizona — [and] she didn’t even have a head-shot when she auditioned, which is really cool. And we wanted total fresh newcomers and we wanted the show to have this really raw quality that was super-unpolished.”

The raw newcomers, combined with seasoned vets such as Thurman and Goldwyn,  was an important part of the “Chambers” experience for Rachel.

“[Uma] and Sivan got really close during production, ’cause they had to, and because I think Sivan wanted to learn and Uma was eager to take her under her wing,” Rachel said. “So it was very often on set this mixture of mentorship and acting. Meanwhile, I’m just learning from everybody. But there was a freshness from the cast that especially Sivan brought. And so it was really beautiful to watch, and I think [it was] exciting for me and Uma to work with somebody so unpolished. So as much as she learned from them, they learned from her, too. So it was exciting to meld these acting legends with complete unknowns, they are really incredible.”