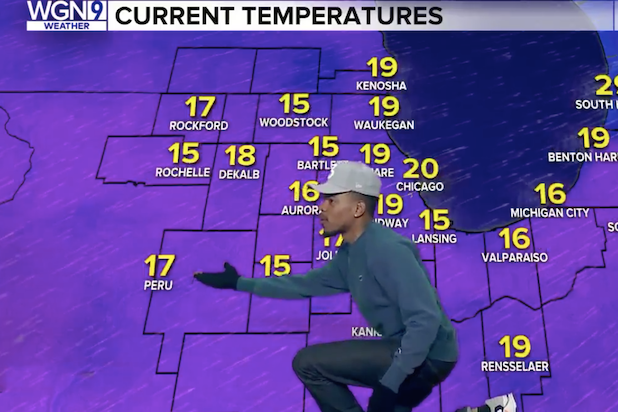 Hip-hop artist. Comedian. And now… meteorologist? Is there anything Chance the Rapper can’t do?

Fresh off his well-received stint hosting “Saturday Night Live,” Chicago’s favorite son might now be the Windy City’s favorite weatherman as well. Chance stopped by WGN9’s morning news show on Friday, and seamlessly navigated the day’s weather forecast (I thought you needed a degree for that?).

Maybe we should start calling him Chance the Meteorologist… ?
Or not. Here's your morning forecast from @chancetherapper ! #ChicagosVeryOwn #WGNToyDrive pic.twitter.com/yNu6Xw9CA7

The “No Problem” singer started off highlighting some activity in Illinois, and was pleasantly surprised to find there’s a Peru in his home state. Chance then grabbed his winter coat in case he had “to check out books at the Hogwart’s library,” and got a few wheezing laughs out of the crew. After St. Louis caught his eye as being “part of Illinois, apparently,” Chance went into straight weatherman mode, pointing out the chilly 34 degree forecast and “light snow” on the horizon.

The new gig “wasn’t hard at all,” according to Chance, and Chicagoans seemed to enjoy it, too.

One Peru, Illinois native was giddy the rapper knows his hometown exists, “which means Chance the Rapper knows I exist.”

Even other weathermen had to give props, with Omaha meteorologist Matt Serwe telling Chance “we have an open spot. You got a good start on your reel here.”

Hey @chancetherapper, if you are looking for a job, we have an open spot. You got a good start on your reel here. https://t.co/Nev8W72AOz