You probably know Chanel Miller as Emily Doe. She was the anonymous victim in the Stanford swimmer case, the unconscious, half-naked woman who was found by a set of dumpsters by a fraternity on the Palo Alto campus.

You also probably know her from her victim impact statement — a statement published by BuzzFeed and viewed by millions, that even elicited a response from the White House.

But in these descriptors, in the public imagination of who she was and the reports of what had happened to her, one crucial thing remained missing: her name. And with her name, the fullness of her story.

Four years after the attack, Miller’s memoir, “Know My Name,” gives readers the privilege of knowing her not just as Emily Doe, but as Chanel Miller the writer, the artist, the survivor, the fighter. Published last week, Miller’s memoir is a heartrending recollection and analysis of the events surrounding her assault, the years-long court trial that ensued, and her ongoing journey to heal and transform her trauma into power and solace for other survivors. It is also, through its deeply personal insights, an incisive critique of rape culture, white privilege, and the ways in which survivors are frequently gaslit, discredited, and made two-dimensional through a flawed justice system and a relentless media cycle.

The story of her assault had been, for the most part, confined in the public understanding to the one-sided story of Stanford swimmer Brock Turner. Miller says Turner, the man who assaulted her, was frequently described in articles and court statements with language that referred to his lost potential: He was a would-be Olympian, a “baby-faced Stanford freshman,” a sheltered kid whose life would be ruined because of “20 minutes of action,” a — and this is the irony of it all — victim of his own actions who did not deserve to experience the “severe impact” of a prison sentence.

In contrast, the Emily Doe he groped and fingered and grinded against by a set of dumpsters, while she was unconscious, was depicted and critiqued through the lens of rape culture. Through cross-examinations from Turner’s defense, letters of support for Turner, and online comments, Miller writes that she was dismissed as a “party animal” who drank to the point of unconsciousness — a woman who was somehow at fault because she should have known that going to a frat party meant she’d be susceptible to assault and rape.

Also Read: Read the Most Powerful Lines in the Stanford Sexual Assault Victim's Letter to Her Attacker

“He was not forced to acknowledge the facts of his present. He was talked about in terms of his lost potential, what he would never be, rather than what he is,” Miller writes. “He got to be a person. Where was her redemption story? Nobody talked about the things she might go on to do.” 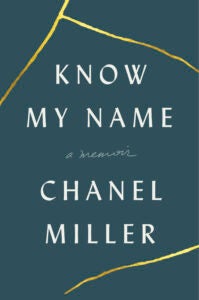 Through “Know My Name,” Miller begins filling in the blanks and expanding the margins. The memoir is intensely emotional and at times difficult to read. But by revisiting the damage, Miller begins to reclaim her strength.

How survivors are treated after they come forward will long be enmeshed in the fabric of the #MeToo movement, which grew in prominence a year after Miller’s victim impact statement went viral. And how perpetrators fare after being implicated or convicted — due to their own actions — can be seen as another damning testament to how privilege and power tip the scales in the fight for justice. Turner was sentenced to six months in county jail but ultimately only spent 90 days in a cell. That he was convicted for his actions is progress, yes. But Miller’s account lays bare just how far there is to go.

The safety net provided to Turner by his privilege can be neatly summarized in a sentence from his own statement to the court: “I just existed in a reality where nothing can go wrong or nobody could think of what I was doing as wrong.”

But as Miller asks: “In this system, who is untouchable? Who is disposable? Whose lives are we intent on preserving? Who goes unaccounted for?”

“For years, the crime of sexual assault depended on our silence. The fear of knowing what happened if we spoke. Society gave us one thousand reasons; don’t speak if you lack evidence, if it happened too long ago, if you were drunk, if the man is powerful, if you’ll face blowback, if it threatens your safety,” Miller writes. “The barricades that held us down will not work anymore. And when silence and shame are gone, there will be nothing to stop us.”