As the Chicago Cubs battled the Cleveland Indians over 10 innings and a delay on their way to winning the World Series, Channing Tatum and several of Universal Pictures Chairman Jeff Shell’s friends and colleagues honored him at Universal Studios last night, raising $1.9 million for the non-profit Fulfillment Fund.

Tatum, who starred in Universal’s “Hail, Caesar” earlier this year and has an R-rated musical comedy with Joseph Gordon-Levitt in the works with the studio, transformed his presentation duties into a roast of the successful studio boss. 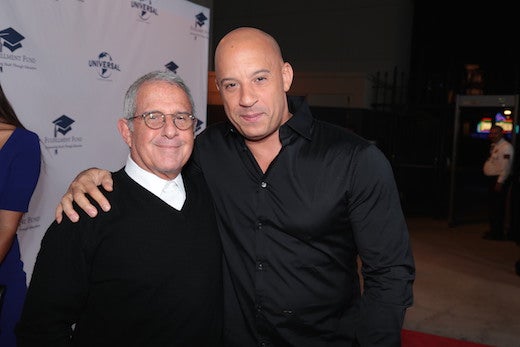 “We go way back. Jeff has one of those really great Hollywood stories,” the actor-producer-dancer joked. “We both worked as exotic dancers before we graduated Harvard Business School.”

“We first met in his early days when he came in to do some body doubling work for us on ‘Magic Mike’,” Tatum continued. “Everyone knows when you want some good thong work done, there’s only one person to call. That’s Jeff Shell. Sorry man.” 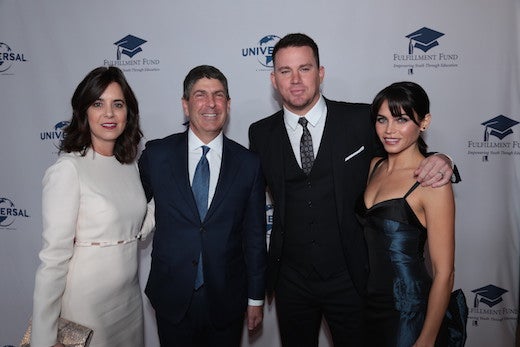 “I’ll let you guys use your imaginations on that,” Tatum added. “I wouldn’t be the man I am today without you.”

Shell gave it back when it was his turn. “You can go now,” he opened, after hugging the one-time model. “Channing, given that my parents are here, thank you again for everything you said.” 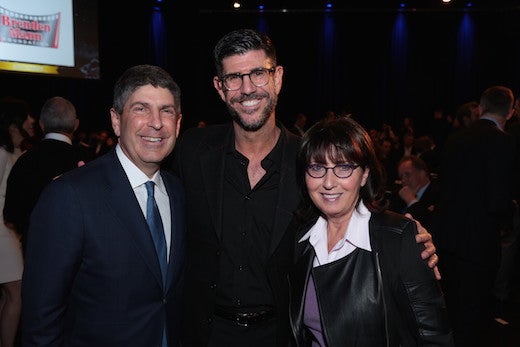 “It has also come to my attention that I was not in any of those films,” Tatum said. “What’s up with that, Jeff? We should talk about that. I can be faster and furiouser. You haven’t even seen my velociraptor [gestures], man. I got it all day. I’m usually more humble than this, but I look great in yellow. I could have been a Minion.”

Vin Diesel, the star of Universal’s billion-dollar “Fast and Furious” franchise, was there, escorting studio chair Donna Langley down the carpet while holding her hand.

“She shakes [my hand] now. She’ll hold it after I do a couple more hit movies,” Talbert teased when TheWrap pointed out Universal’s closely knit community of filmmakers on display.

In a refreshing makeover from the traditional Beverly Hills hotel dinner (“something you’ve all been to a million times,” MC Julia Boorstin said), the Fund herded the program and speeches into a tight presentation inside the Globe Theatre on the Universal lot and then threw a prolonged open-ended after party at Universal’s new “Wizarding World of Harry Potter” park.

Many industry vets got their first taste of a massive tourist attraction, the incredible “Harry Potter and the Forbidden Journey” 3-D ride inside Hogwarts Castle. They also munched on traditional Hogwarts/British food, like bangers and mash and shepherd’s pie.

It was a refreshing change of pace for industry locals who would otherwise likely never set foot in the theme park above the 101 freeway. Some, including this reporter, ventured into Hogwarts Castle for a second spin on the ride. Long after the Cubs were soaking in champagne in the Cleveland clubhouse, Shell was still holding court near the butterbeer kiosks and the Flight of the Hippogriff roller coaster.

From the NBC Universal family, Ron Meyer sat in the front row next to Tatum and wife Jenna Dewan (all three raising their hands for $5,000 donations), with Universal’s star producer of the year Chris Meledandri (“The Secret Life of Pets”), and power producer Jason Blum also on the scene.

“This organization is kind of a triple whammy for me,” Shell told TheWrap while standing with his old buddy from University High School, Kenny Rogers, now the non-profit’s CEO.

“It’s one of the most effective public school enhancing organizations in L.A.,” he said. “Universal has had a long relationship with them. My best friend from high school runs the place, and it’s the Tom Sherak Award, a guy I worked with at Fox and I miss every day.”

The fund boasts a 90 percent success rate in getting high school students to college compared to a 50 percent average among low-income high school graduates nationally.