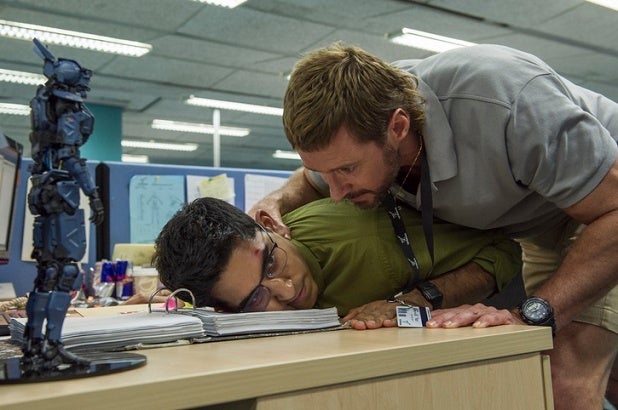 The sci-fi movie “Chappie” opened with $13.3 million to lead the box office this weekend, but moviegoers collectively yawned over a field overloaded with R-rated films.

Writer-director Neill Blomkamp‘s robot saga knocked off Will Smith‘s caper comedy “Focus,” which was second with $9.7 million. The holdover spy spoof “Kingsman: The Secret Service” was fourth with $8.3 million.

Vince Vaughn comedy “Unfinished Business” bombed and barely made the top ten with $4.8 million in its debut, giving the actor five straight misfires.

All of those movies were rated “R,” which was a big part of the problem as the weekend came in a whopping 40 percent under the comparable weekend last year. Six of this weekend’s top 11 movies were R-rated and even the biggest milestone achievement — “American Sniper” becoming the highest-grossing film released in 2014 with $337.2 million — came from a movie with the restrictive ratings.

“Certainly ‘American Sniper,’ ‘Fifty Shades’ and ‘Kingsman’ proved that there is an audience out there for these films, but each of those had a branding or controversy hook to draw audiences or, in the case of ‘Kinsgman,’ it just looked so darn cool and got solid reviews that it became irresistible,” he said.

An exception was “The Second Best Exotic Marigold Hotel” — a rare sequel to an indie film — which was rated PG and opened to a solid $8.6 million while in just 1,573 theaters for Fox Searchlight. Its $5,500 per-screen average was better than any movie in the top ten.

The only kids film in the marketplace has been there for five weeks. “The SpongeBob Movie: Sponge Out of Water” took fifth with $7 million for Paramount Pictures. It beat out the R-rated “Fifty Shades of Grey,” which brought in $5.6 million, crossed the $150 million mark domestically and lifted its worldwide total to $527 million after four weeks for Universal Pictures.

Sony Pictures’ “Chappie,” which stars Hugh Jackman and Dev Patel and features Sharlto Copley as the voice of the robot, is the lowest opening of Blomkamp’s films by far. Its total was well under half of that of his last movie, 2013’s “Elysium” ($29.8 million), and his first “District 9” ($37.3 million).

It wasn’t as well-reviewed as those films, at just 30 percent positive on Rotten Tomatoes. “Elysium” was at 68 percent and “District 9”  was 90 percent positive when they debuted. Audiences, which were 60 percent male and 57 percent under 30 years of age, gave it a “B” CinemaScore.

Meanwhile, the opening for “Unfinished Business” was the worst in Vaughn’s recent run of misfires, lower than that of “Delivery Man,” “The Internship,” “The Watch” and “The Dilemma.”

The audience was 55 percent male and 54 percent over 25, and they gave “Unfinished Business” a “B-” CinemaScore. That was better than the critics, who ripped it and had it at 13 percent positive on Rotten Tomatoes.

“Kingsman,” the comic book adaptation starring Colin Firth dropped just 30 percent in its fourth week. That helped lift its domestic total to nearly $100 million and its worldwide haul to roughly $250 million for Fox.

“Second Best Exotic Marigold Hotel” has a tough act to follow, since the original was one of 2012’s biggest box-office success stories. It took in $136 million on a $10 million production budget.

But “Second Best” is off to a fine start, having taken in more than $21 million worldwide in two weeks.

Richard Gere joins the returning cast of Judi Dench, Dev Patel, Tom Wilkinson, Maggie Smith and Bill Nighy in “Second Best,” which like the first film is directed by John Madden and was created by Searchlight, Participant Media and Blueprint Pictures.

Like the first film, the story of British seniors away from home plays best with older moviegoers.

“With a B+ Cinemascore and the knowledge that the film should hold well over the next few weekends, this opening is very encouraging,” said Fox Searchlight distribution head Frank Rodriguez. “Second Best” will expand to roughly 1,800 theaters next week, he added.