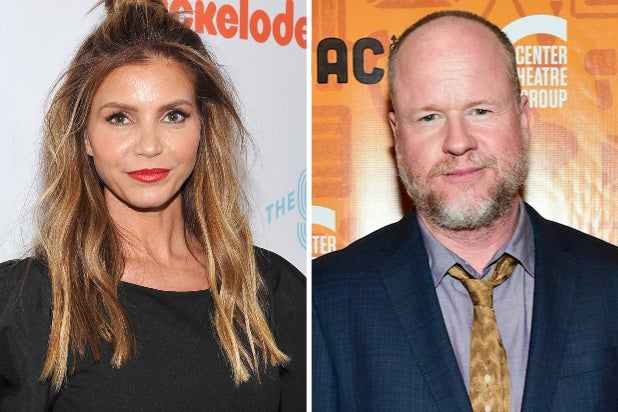 In a lengthy statement tweeted by the actress, who played Cordelia Chase on both “Buffy” and its spinoff “Angel,” accused Whedon of “retaliatory” and “cruel” behavior while she was pregnant on the set of “Angel,” and said she supports “Justice League” star Ray Fisher’s claims against Whedon.

Carpenter also said she was part of WarnerMedia’s investigation into Whedon’s actions on the set of “Justice League,” following Fisher’s accusations of “gross, abusive, unprofessional” behavior against Whedon, who took over reshoots on the film when original director Zack Snyder had to exit due to a family tragedy.

“Recently, I participated In Warner-Media’s Justice League investigation because I believe Ray to be a person of integrity who is telling the truth,” Carpenter wrote. “His firing as Cyborg in The Flash was the last straw for me. Although I am not shocked, I am deeply pained by it. It troubles and saddens me that in 2021 professionals STILL have to choose between whistleblowing in the workplace and job security.”

WarnerMedia launched an investigation following Fisher’s accusations, which was “conducted by an outside law firm and led by a former federal judge” and during which “more than 80 people were interviewed,” according to the company.

“Last summer, Mr. Fisher was offered the opportunity to reprise his role as Cyborg in ‘The Flash,'” WarnerMedia said in a statement Jan. 14. “Given his statement that he will not participate in any film associated with [DC Films president Walter Hamada], our production is now moving on.”

Fisher tweeted his support for Carpenter, thanking her for coming forward with her own accusations against Whedon and thanked her for speaking out about her participation in the “Justice League” investigation.

“Charisma Carpenter is one of the bravest people I know,” Fisher wrote. “I am forever grateful for her courage and for her lending her voice to the Justice League investigation. Read her truth. Share her truth. Protect her at all costs. ‘It is time.’ A>E.”

Representatives for Whedon declined to comment Wednesday, and spokespersons for WarnerMedia and 20th Television, the studio that produced by “Buffy” and “Angel,” did not immediately respond to TheWrap’s request.

Starring Sarah Michelle Gellar as Buffy Summers, “Buffy the Vampire Slayer” ran for seven seasons from 1997-2003, first on the now-defunct WB and then on the now-defunct UPN. “Buffy’s” David Boreanaz-led spinoff “Angel” aired for five seasons on The WB from 1999-2004. Carpenter was part of the “Buffy” cast through Season 3 before moving over to “Angel,” which she starred on alongside Boreanaz through its fourth season.

Gellar released a statement on Instagram hours after Carpenter’s Wednesday, saying she stands “with all survivors of abuse and am proud of them for speaking out.”

Michelle Trachtenberg, who played Buffy’s sister, Dawn, shared Gellar’s statement, writing: “Thank you @sarahmgellar for saying this. I am brave enough now as a 35 year old woman…. To repost this. Because. This must. Be known. As a teenager. With his not appropriate behavior……”

“The last. Comment I will make on this. Was. There was a rule. Saying. He’s not allowed in a room alone with Michelle again,” Trachtenberg later updated her caption.

Amber Benson, who played Tara Maclay on “Buffy,” also stood behind Carpenter, tweeting: “Buffy was a toxic environment and it starts at the top. @AllCharisma is speaking truth and I support her 100%. There was a lot of damage done during that time and many of us are still processing it twenty plus years later.”

Actress Clare Kramer, who played the evil Glory on “Buffy,” also tweeted in support: “For what it’s worth, I believe and stand with @allcharisma , @ray8fisher , @amber_benson and others who have the strength to come forward with their truth. A lot of this industry needs a reset.”

Carpenter’s comments mark the most recent development in an ongoing dispute between Fisher and WarnerMedia which began last July, when the actor publicly accused Whedon of “gross, abusive, unprofessional” behavior on the set of “Justice League.” Fisher said Whedon’s behavior was enabled by then-DC Entertainment president Geoff Johns and by Jon Berg, former co-president of production at Warner.

Last November, amid the “Justice League” investigation, Whedon announced he was exiting his sci-fi drama “The Nevers,” a passion project that was ordered to series at WarnerMedia’s HBO in 2018. Two weeks later, WarnerMedia said that it had concluded the investigation into Fisher’s accusations and had taken unspecified “remedial action” against unidentified individuals.

In 2017, TheWrap ran a guest blog written by Whedon’s ex-wife Kai Cole, in which she called out Whedon as a “hypocrite preaching feminist ideals.”

See Carpenter’s statement in full below.

For nearly two decades, I have held my tongue and even made excuses for certain events that traumatize me to this day,” Carpenter’s statement begins. “Joss Whedon abused his power on numerous occasions while working together on the sets Of Buffy the Vampire Slayer and Angel While he found his misconduct amusing, it only served to intensify my performance anxiety, disempower me, and alienate me from my peers. The disturbing incidents triggered a chronic physical condition from which I still suffer It IS with a beating, heavy heart that I say I coped in isolation and, at times, destructively.

Last summer, When Ray Fisher publicly accused Joss of abusive and unprofessional behavior toward the cast and crew during reshoots on the Justice League set in 2017, it gutted me. Joss has a history of being casually cruel. He has created hostile and toxic work environments since his early career. I know because I experienced it first-hand. Repeatedly.

Like his ongoing, passive-aggressive threats to fire me, which wreaks havoc on a young actor’s self-esteem. And callously calling me “fat” to colleagues when I was 4 months pregnant, weighing 126 lbs. He was mean and biting, disparaging about others openly, and often played favorites, pitting people against one another to compete and vie for his attention and approval.

He called me in for a sit-down meeting to interrogate and berate me regarding a rosary tattoo I got to help me feel more spiritually grounded in an increasingly volatile work climate that affected me physically.

Joss intentionally refused multiple calls from my agents making it impossible to connect with him to tell him the news that I was pregnant. Finally, once Joss was apprised of the situation, he requested a meeting with me. In that closed-door meeting, he asked me if I was “going to keep it” and manipulatively weaponized my womanhood and faith against me. He proceeded to attack my character, mock my religious beliefs, accuse me Of sabotaging the show, and then unceremoniously fired me the following season once I gave birth.

At six months pregnant, I was asked to report to work at 1:00 AM after my doctor recommended shortening my work hours. Due to long and physically demanding days and the emotional stress of having to defend my needs as a working pregnant woman, I began to experience Braxton Hicks contractions. It was clear to me the 1:00 AM call was retaliatory.

Back then, I felt powerless and alone. With no other option, I swallowed the mistreatment and carried on. After all, I had a baby on the way, and I was the primary breadwinner of my growing family. Unfortunately, all this was happening during one of the most wonderful time in new motherhood. All that promise and joy sucked right out. And Joss was the vampire.

Despite the harassment, a part of me still sought his validation. I made excuses for his behavior and repressed my own pain. I have even stated publicly at conventions that I’d work with him again. Only recently, after years of therapy and a wake up call from the Time’s Up movement, do I understand the complexities of this demoralized thinking. It is impossible to understand the psyche without enduring the abuse, Our society and industry vilify the victims and glorify the abusers for their accomplishments. The onus is on the abused with an expectation to accept and adapt to be employable. No accountability on the transgressor who sails on unscathed. Unrepentant. Remorseless.

These memories and more have weighed on my soul like bricks for nearly half of life. I wish I said something sooner. I wish I had the composure and courage all years ago. But I muted myself in shame and conditioned silence.

With tears welling. I feel an overwhelming sense of responsibility to Ray and others for remaining private about my experience with Joss and the suffering it has caused me. It is abundantly evident that Joss has persisted in his harmful actions, continuing to create wreckage in his wake. My hope now, by finally coming forward about these experiences, is to create space for the healing of others who I know have experienced similar serialized abuses of power.

Recently, I participated In Warner-Media’s Justice League investigation because I believe Ray to be a person of integrity who is telling the truth. His firing as Cyborg in The Flash was the last straw for me. Although I am not shocked, I am deeply pained by it. It troubles and saddens me that in 2021 professionals STILL have to choose between whistleblowing in the workplace and job security.

It has taken me so long to muster the courage to make this statement publicly. The gravity of it is not lost on me. As a single mother whose family’s livelihood is dependent on my craft, l’m scared, Despite my fear about its impact on my future, I can no longer remain silent. This is overdue and necessary. It is time.