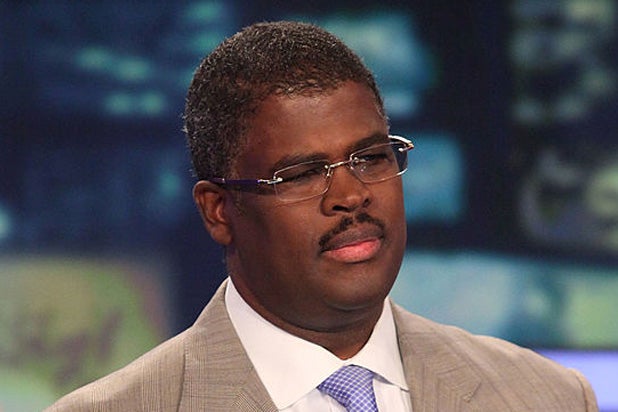 Hughes is now suing the “Making Money” host, who last month returned to work after being suspended during an investigation into sexual assault allegations against him.

She also accuses Fox News of leaking her name to the National Enquirer after she reported the alleged rape.

In her suit, Hughes accuses Payne of raping her in 2013, when they were preparing to appear on a Fox program.

“In July 2013, while they were both in New York City to appear on a Fox program, Payne pressured his way into Ms. Hughes’s hotel room for a ‘private discussion.’ Tragically, Payne sexually assaulted and raped Ms. Hughes,” reads the suit, filed Monday in federal court in New York. “Despite her clear refusal of his advances and telling him ‘no’ and to ‘stop,’ Payne forced her to engage in sexual intercourse against her will. Too shocked and ashamed to speak out, Ms. Hughes told no one about what happened.”

The suit also accuses Fox of reacting with “appalling cruelty” when she reported the alleged sexual assault and rape to the network, and accuses Fox spokesperson Irena Briganti of leaking her name to the National Enquirer.

“When Scottie Nell Hughes, a political commentator who regularly appeared on Fox News and Fox Business Network, dared report to Fox that she had been sexually assaulted and raped by Fox anchor Charles Payne, Fox responded with an appalling cruelty,” the suit reads. “In late June 2017, Ms. Hughes, confidentially, contacted lawyers at Paul Weiss, the outside firm hired by Fox to conduct ‘internal investigations’ following the barrage of sexual harassment allegations, to disclose the details about the sexual assault and rape, and other relevant facts of her unlawful treatment,” the suit reads. “The lead independent lawyer suggested that it would be best to reach a business solution rather than conduct a formal investigation. The Paul Weiss lawyer explained that a formal investigation simply would open a can of worms.”

The suit goes on to allege that Fox’s public-relations machine then “launched into high gear” by leaking her name and issuing a “self-serving ‘statement'” from Payne.

“Just days later, Fox made clear that a business solution was not feasible. Simultaneously, the wheels of the Fox public relations (“PR”) machine launched into high gear. Suddenly, Ms. Hughes’s manager received a call from a reporter at the National Enquirer seeking comment on a breaking story about Ms. Hughes and Payne. Fox, through its notorious  spokesperson, Irena Briganti, leaked Ms. Hughes’s name to the National Enquirer, knowing that  Ms. Hughes was a victim of a violent sexual assault,” the suit reads. “Despicably, Fox leaked Ms. Hughes’s identity to the National Enquirer at the same time that it emailed a self-serving ‘statement,’ purportedly drafted by Payne, that expressed his sorrow at having engaged in what he described as an affair with Ms. Hughes.”

Eventually, Hughes says, she was blacklisted by Fox.

“Ms. Hughes went from appearing on Fox programs four or five times a week to only appearing five times in total over a ten-month period,” the suit reads. “Eventually, she learned that Fox had blacklisted her.”

Payne was suspended on July 6. On Sept. 8, Fox Business Network confirmed that he would return to the network following the investigation into the sexual harassment claims against him. No details on the actual results of the investigation were made available.

The claims against Payne came from a female political analyst who was a frequent guest on his program, “Making Money,” among other Fox shows. She claimed to have been “coerced” into a sexual relationship with the married man.

For his part, Payne has admitted to having an affair with his accuser — but he’s strongly denied harassing the woman in question

“My complaint speaks for itself. What is most important to me is that justice will prevent other women from going through the nightmare I’m now living,” Hughes said in a statement provided to TheWrap. “On my behalf, [Hughes’ law firm] Wigdor LLP will expose Fox’s unconscionable conduct, including leaking my name to the media. I am grateful to my husband, family, friends and colleagues for the outpouring of love and support.”

“My client Charles Payne vehemently denies any wrongdoing and will defend himself vigorously against this baseless complaint,” Halpern said in a statement provided to TheWrap. “We are confident that when the evidence is presented in this case, Mr. Payne will be fully vindicated and these outrageous accusations against him will be confirmed as completely false.”

In a statement to TheWrap, a Fox News spokesperson called the lawsuit a “publicity stunt” and “bogus.”

“The latest publicity stunt of a lawsuit filed by Doug Wigdor has absolutely no merit and is downright shameful. We will vigorously defend this,” the spokesperson said. “It’s worth noting that Doug is Ms. Hughes’ third representative in the last six months to raise some variation of these claims which concern events from four years ago, since it apparently took some time to find someone willing to file this bogus case.”

“Fox cannot spin its way out of this crisis – especially when only Fox is to blame for what happened. Regardless of the fact that the sexual assault and rape, as alleged, happened in 2013, the events exposing Fox’s liability exposure (as opposed to Payne) occurred less than two months ago when Fox Executives at the highest levels leaked Ms. Hughes’s name to a tabloid,” Wigdor said. “The ‘representatives’ that Fox refers to in its statement include her agent and a lawyer not admitted in NY, so the suggestion that Ms. Hughes was shopping for a lawyer is yet another desperate attempt at avoiding the real issues and blaming the victim. Sadly, nothing has changed at Fox.”