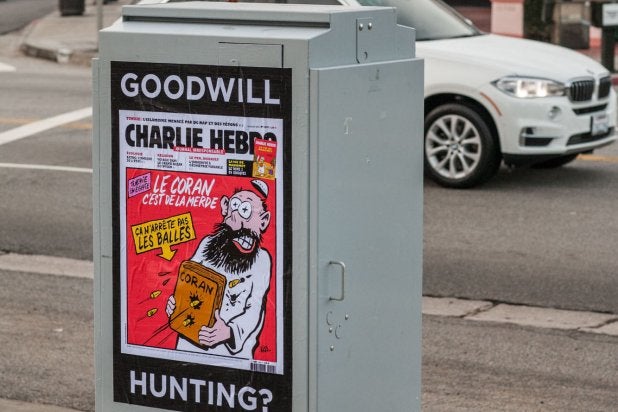 While Hollywood’s film and television stars were honoring the lives lost in France at the offices of the satirical magazine Charlie Hebdo inside the Golden Globe Awards, a different kind of tribute was happening outside in Los Angeles. Anonymous street artists posted a series of images throughout the Pacific Palisades and Brentwood areas of West L.A. The images featured one of Charlie Hebdo’s controversial covers framed by the words “Goodwill Hunting?”

Considering where this took place, the words appear to be a play on the title of the 1997 feature film “Good Will Hunting,” which earned co-writers Matt Damon and Ben Affleck Academy Awards. Both stars also live in the neighborhood.

The inclusion of the words may mean more than the obvious connotation of simply seeking goodwill in light of the violent attacks. But there could be a deeper meaning as well, considering the posters come a month after Affleck got into a notable argument with Bill Maher, accusing the “Real Time” host of generalizing the Muslim world, calling his comments “gross,” “racist,” and “like saying you’re a shifty Jew.”

The Charlie Hebdo cover featured in the posters features an Egyptian man being killed in a hale of gunfire. He is holding a copy of the Koran in front of him, with bullets ripping through it as well. The translation of the words on the cover read, “The Koran is shit” and “It can’t even stop these bullets.”