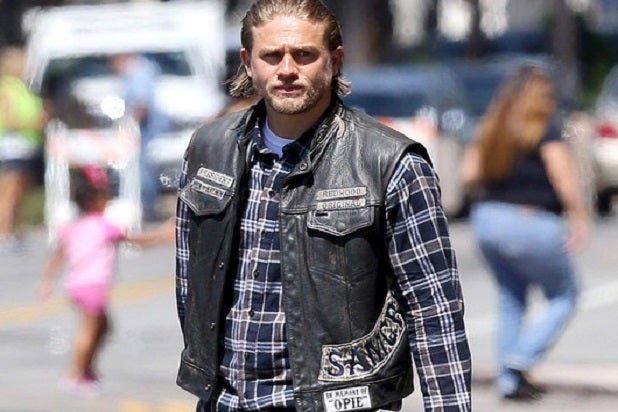 Could Jax Teller ride on FX once again?

“Sons of Anarchy” star Charlie Hunnam told TMZ on Wednesday that he’d be open to appearing on FX’s upcoming “Sons” spinoff “Mayans MC,” which received a pilot order from the network earlier this month.

As Hunnam sees it, however, there’s a hurdle to his appearance, and it’s a pretty tall one.

“The last I saw, Jax Teller was dead,”  Hunnam said.

Which would seem to be true. On the series finale of FX’s biker drama, Hunnam’s character Teller was seen (and don’t even complain about spoilers at this point) riding his bike and putting himself on a collision course with a truck driven by Michael Chiklis.

Given that the spinoff takes place in a post-Jax Teller world, that might complicate things.

Still, the actor allowed, perhaps Teller could make an appearance by way of a dream sequence.

Hunnan added, “I’d do anything for [‘Sons’ creator] Kurt [Sutter]. I love that guy.”

So there it is, “Sons” fans — a definite yeah, possibly.

The new project centers on E.Z. Reyes, a prospect in the Mayan MC charter on the Cali/Mexico border, who struggles with his desire for vengeance against the cartel, and his need for respect from the woman he loves.

Sutter co-wrote the pilot for the spinoff with Elgin James, and will also direct it.

Watch Hunnam talk about the spinoff in the video.