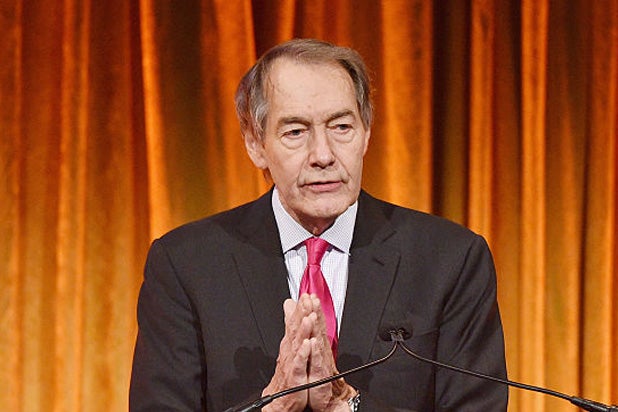 Charlie Rose faced internet wrath after the New York Post reported Wednesday evening that someone was shopping a #MeToo redemption series which would star the disgraced CBS anchor.

Per the Post, the plan would call for Rose to interview various men who have seen their careers toppled in the sexual harassment reckoning that has whipped around media, Hollywood and politics. The Page Six report said some of the possible interview subjects included Louis C.K and Matt Lauer.

Writing for the Post, Ian Mohr said that Vanity Fair and Daily Beast alum Tina Brown had been approached to produce the potential series but had turned it down.

Also Read: Charlie Rose Makes Cryptic Return to Twitter, Gets Mobbed by Fans: 'I Miss You, the Alternatives Are S--'

Rose was ousted from his perch at CBS and PBS over several accusations of sexual misconduct, and the internet is not ready for a comeback tour.

Can Charlie do it in a thong? Because Charlie Rose in a thong, that I would tune in for. https://t.co/oHLPKTThgE

"Disgraced CBS anchor Charlie Rose is being slated to star in a show where he’ll interview other high-profile men who have also been toppled by #MeToo scandals." https://t.co/f4H4Ut4sHQ

"Disgraced CBS anchor Charlie Rose is being slated to star in a show where he’ll interview other high-profile men who have also been toppled by #MeToo scandals." https://t.co/OKUrim3SV6

What about the show where we hear from all the women whose careers were derailed by Charlie Rose & men like him?

…and the women who didn't pursue the careers they wanted to because of men like Charlie Rose?

…and the women whose lives were destroyed by men like Charlie Rose? https://t.co/eQHKR9h3HC

We read every week, it seems like, about good reporters losing their jobs having done nothing wrong except work for a paper owned by the wrong hedge fund. That seems like a more urgent problem than whether Charlie Rose ever gets to do another interview.

Charlie Rose show idea is weak sauce. I’m holding out for a TV series where OJ Simpson interviews other people who killed people and kinda-sorta got away with it and how they struggle with the stigma.

Literally every woman in my entire feed is filled with massive rage over this Charlie Rose news right now. My feed is just anger and fury all up and down.

I am only up for this Charlie Rose show if it is a reality competition called The Reckoning & it is hosted by the angry ghost of Frances Farmer.

Charlie Rose interviewing Matt Lauer while both wear nothing but loosely fitting bathrobes is going to be a ratings hit https://t.co/9a10ZDjBHJ